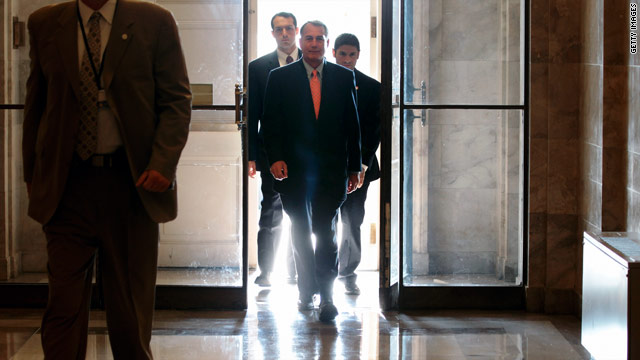 The debt ceiling battle: Where things stand on a vote

The federal government has four days left to raise the nation's current $14.3 trillion debt ceiling, the Treasury Department said. A failure to do so will risk an unprecedented national default.

Senate Democrats on Friday blocked the latest House Republican proposal to cut spending and increase the federal debt ceiling, setting up a weekend of negotiations to seek a deal that would avoid a potential federal default next week.

Earlier Friday,Â House Republicans passed Speaker John Boehner's latest proposal, overcoming opposition from Democrats and tea party conservatives. But Democrats had vowed to defeat it in the Senate, where they have the majority.

The plan originally called for a congressional vote on a balanced budget amendment to the Constitution by the end of the year. Boehner has since reached out to disgruntled conservatives by amending the plan to require congressional passage of such an amendment as a condition for raising the debt limit by the full $2.5 trillion, according to two GOP congressmen.

The vote was scheduled to have taken place on Thursday night,Â but Republican leaders postponed the vote amid signs they did not have enough support to pass it.

Reid said Friday morning that he "must take action" on the Senate's legislation by the end of the day.

Obama has endorsed Reid's plan and threatened a veto of Boehner's plan. The president strongly opposes any bill which doesn't raise the debt ceiling through the 2012 election. Obama has promised to veto any short-term debt ceiling extension unless it paves the way for a "grand bargain" of more sweeping reforms and revenue increases.