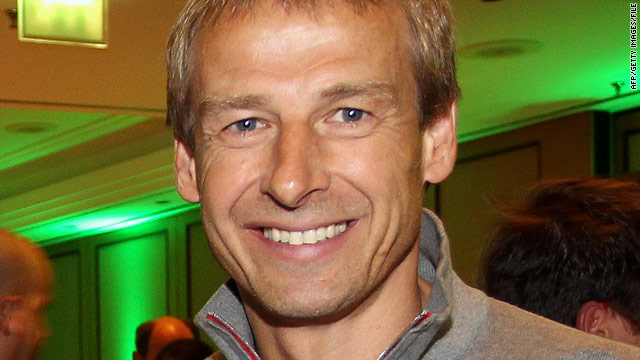 The U.S. men's national soccer team, a day after firing its coach of almost five years, has named former German skipper Jürgen Klinsmann to take the helm ahead of the 2014 World Cup.

U.S. Soccer President Sunil Gulati, in announcing the team’s 35th manager, said he was excited to see Klinsmann taking over.

“He is a highly accomplished player and coach with the experience and knowledge to advance the program,” Gulati said in a statement. “Jürgen has had success in many different areas of the game and we look forward to the leadership he will provide on and off the field.”

Gulati announced Thursday that Bob Bradley, who had coached the team since January 2007, had been relieved of his duties.

The U.S. Soccer Federation will hold a news conference Monday to formally introduce the 46-year-old Klinsmann as its coach. His first match will be a highly anticipated August 10 bout with Mexico, which thrashed the U.S. 4-2 in this year’s Gold Cup final.

“I’m excited about the challenge ahead. I am looking forward to bringing the team together for our upcoming match against Mexico and starting on the road toward qualifying for the 2014 FIFA World Cup,” Klinsmann said.

Klinsmann’s record as a coach is a mixed bag. Though he silenced many of his critics by leading Germany to a third-place trophy in the 2006 World Cup, he stepped down to be with his wife, Debbie, and their two children, who live in California.

“I have a big wish to return to my family and get back to normality,” he said during a news conference announcing his resignation.

In 2008, the Goppingen native took over Bayern Munich, one of Germany’s most prestigious club teams, but he was replaced after a year, despite a 25-9-9 record and making the quarterfinals of Europe’s Champions League. It was widely reported that he did not see eye-to-eye with Munich’s board of directors.

It’s worth noting that Klinsmann coached American star Landon Donovan during a loan to Munich. Klinsmann told Sports Illustrated's Grant Wahl last year that he believes Donovan “can play at the highest level” and thinks the 29-year-old midfielder could have excelled in Germany’s Bundesliga had he been given more time.

Klinsmann’s resume as a player is far more impressive than his coaching CV. As a striker, “the Golden Bomber” had a knack for finding the back of the net and amassed 232 goals in 516 games during his 17-year club career. During that time, he played for some of the world’s best teams, including Italy’s Inter Milan, England’s Tottenham Hotspur and Bayern Munich.

He also played for the West German national team that won the 1990 World Cup and the German squad that brought home 1996’s European Championship. He scored 47 goals in 108 games for his national team.

Klinsmann has been considered for the U.S. post in the past, but negotiations crumbled twice over the amount of control Klinsmann would wield in coaching the top American squad.

Last year, Klinsmann told Wahl that he passed on the job after the 2006 World Cup but “left it totally positive.” In a separate interview with SI’s soccer guru, Klinsmann said he turned down the job following the 2010 World Cup because the U.S. Soccer Federation wouldn’t give him full control of the team in writing. He declined to explain exactly what the federation refused to include.

“That goes too much into specifics,” Klinsmann told Wahl. “I don't want to go that far. We couldn't get the deal done because of a couple of issues, and the main issue was we couldn't get it into a written format. And that's it.”

Klinsmann will immediately replace Bradley, who was signed to a second four-year contract in August. He had a 45-25-12 record but faced criticism for decisions that observers said led to losses in pivotal games. Included are a 2-1 loss to Ghana in the second round of the 2010 World Cup, and blown 2-0 leads in the 2009 Confederations Cup final against Brazil and the Gold Cup final against Mexico in June.