Brittney Griner has pleaded guilty to drug charges in a Russian court. The detained WNBA star could face up to 10 yātwitter.com/i/web/status/1ā¦dV

British Prime Minister Boris Johnson is to resign after support from his party drained away, ending a tenure miredātwitter.com/i/web/status/1ā¦6X

An officer sought a supervisor's permission to shoot the gunman before he entered the school, says a report that ciātwitter.com/i/web/status/1ā¦Ji 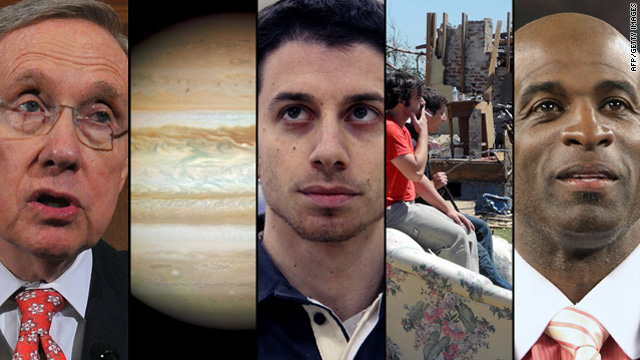 [Updated at 9:05 p.m. ET] Congressional leaders and the White House reached a tentative deal on raising the U.S. debt ceiling Sunday, but with votes still to come, there was still plenty to do beat Tuesday's deadline and prevent a possible national default. Here is a look at this and other stories that CNN plans to follow this week:

Deadline for debt deal is Tuesday

Raising the federal debt ceiling - so that the government can borrow more money to pay its bills - usually is a less dramatic event. But this year congressional Republicans have demanded that any vote be tied to a plan for reducing deficits through spending cuts. A deal was slow in coming, with Republicans saying Democrats were insisting on tax increases that Republicans opposed.

On Sunday night, President Barack Obama announced a deal with congressional leaders that would raise the debt ceiling and make spending cuts in two stages. Cuts worth about $1 trillion over 10 years would be enacted in the plan's first stage. In the second stage, a bipartisan commission would report back by November with suggested additional cuts - and potentially revenue increases - to address the nation's budget deficit. (Read details of plan.)

The Treasury Department says if Congress fails to raise the debt ceiling by Tuesday, the federal government will not be able to pay all its bills next month, andĀ Americans could face rising interest rates and a declining dollar, among other problems.Ā Some financial experts have warned of a downgrade of America's AAA credit rating (the United States currently is one of only 17 nations with an AAA rating from Moody's and Standard & Poor's) and a potential stock market plunge.

Obama warned that he couldn't guarantee that Social Security checks will be mailed out on time if the ceiling isn't raised by Tuesday, and Joint Chiefs of Staff Chairman Adm. Mike Mullen said that he doesn't know whether troops will receive paychecks on time if a deal isn't reached.

An Islamist insurgent group linked to al Qaeda is massing troops in Somalia's capital, setting the stage for strikes against pro-government forces in the drought- and famine-stricken country, African Union intelligence sources say.

Insurgent group Al-Shabaab is preparing to fight during the Muslim holy month of Ramadan, which begins Monday, the sources said. African Union forces said they have been steadily taking territory in the capital from Al-Shabaab since September, andĀ Somali government forces Ā launched an offensive on Islamist strongholds in northern Mogadishu last week.

Somalia is battling its worst drought in 60 years, and the United Nations has declared a famine in parts of the country. Tens of thousands have walked from Somalia to Kenya and Ethiopia in search of food and water. Drought is hitting other parts of Africa hard, and aid agencies estimate thatĀ 10 million people in Kenya, Ethiopia, Djibouti, Uganda and Somalia are at risk for famine. Al-Shabaab has banned foreign aid workers from parts of Somalia it controls.

An Iranian court is expected to issue verdicts this week in the case of three American hikers who were detained in Iran two years ago, the hikers' lawyer says.

Iranian police arrested Josh Fattal, Shane Bauer and Sarah Shourd in July 2009, saying they had illegally entered Iran. The trio, who were charged with spying, say they are innocent, arguing they were hiking in Iraq's autonomous Kurdish region and did not knowingly cross into Iran.

Fattal and Bauer have been in custody since their arrest. Shourd, though still considered a defendant, was released in September for medical reasons and returned to the United States.

The hikers' lawyer says that even if his clients are found guilty, he hopes Fatal and Bauer will be released, with their two years in detention counting for their sentence.

Will Cuba start lifting restrictions on sales of cars and homes?

Details on Cuba's plans to lift restrictions on the buying and selling of homes and cars could emerge this week when the nation's National Assembly meets for one of its biannual sessions.

President Raul Castro announced earlier this year that those reforms were coming. Other planned reforms could be discussed by the assembly, too. Last year, Castro announced plans to permit a bigger role for the private sector to absorb some of the 1 million state jobs that he said would need to be eliminated.

The assembly's session on Monday comes a week after Cuba marked the 58th anniversary of the start of the revolution led by Fidel Castro, Raul's brother.

NASA on Friday is expected to launch a spacecraft designed to investigate what is underneath Jupiter's atmosphere.

The Juno spacecraft, sitting atop an Atlas V rocket, is to blast off from Cape Canaveral, Florida. Juno is expected to travel the 400 million miles to Jupiter by 2016.

The University of Alabama will hold its spring commencement on Saturday, about three months after a postponement because of a massive tornado that tore through the university's town.

More than 40 people, including six University of Alabama students, were killed in the April 27 tornado. The disaster postponed graduation ceremonies scheduled for May 7.

The spring commencement is being held on the same day as summer graduation. A candlelight remembrance for the tornado victims will be held Friday, according to The Crimson White.

Seven to be inducted into Pro Football Hall of Fame

The recently concluded NFL lockout forced the cancellation of the annual Hall of Fame preseason game, because the participating teams didn't have enough time to prepare. But the larger event that the game celebrates will still happen Saturday.

A wave of tech companies that were aggressively hiring have announced layoffs in recent weeks as they move to cut cātwitter.com/i/web/status/1ā¦4S
cnni

10:15 am ET July 7, 2022 RETWEET
Canadian swimmer Mary-Sophie Harvey says she was drugged on the final night of the 2022 World Aquatics Championshipātwitter.com/i/web/status/1ā¦Eo
cnni

9:55 am ET July 7, 2022 RETWEET
The fields of Provence and tony spots with yachts -- Nice, Cannes and St. Tropez -- likely spring to mind when youātwitter.com/i/web/status/1ā¦RZ
cnni

9:35 am ET July 7, 2022 RETWEET
āIt was hardā: Nick Kyrgios says it was difficult to focus on his Wimbledon match yesterday amid ongoing allegatitwitter.com/i/web/status/1ā¦uCYpEe
cnni

9:15 am ET July 7, 2022 RETWEET
Three security guards at Wimbledon have been arrested after an alleged fight started between the group, which was tātwitter.com/i/web/status/1ā¦4r
cnni

A round of severe storms brought significant damage and a possible tornado to a town in Ohio. cnn.com/2022/07/06/us/ā¦
CNNweather

3:36 am ET July 7, 2022 RETWEET
Watch the moment a woman was rescued from a car in China floodwaters after Typhoon Chaba. cnn.it/3affiPO
CNNweather

11:45 am ET July 6, 2022 RETWEET
The Great Salt Lake dropped to 4,190 feet on Sunday, the lakeās lowest level on record, according toĀ data from thtwitter.com/i/web/status/1ā¦NLLE9
CNNweather

10:15 am ET July 6, 2022 RETWEET
Carlos Santana was "over-taken by heat exhaustion and dehydration," according to aĀ statement by his management teamātwitter.com/i/web/status/1ā¦DoW
CNNweather

British Prime Minister Boris Johnson is to resign after support from his party drained away, ending a tenure miredātwitter.com/i/web/status/1ā¦6X
cnnbrk

4:32 am ET July 7, 2022 RETWEET
An officer sought a supervisor's permission to shoot the gunman before he entered the school, says a report that ciātwitter.com/i/web/status/1ā¦Ji
cnnbrk