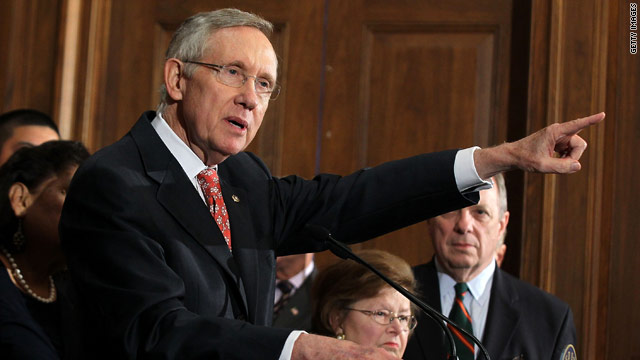 If the debt ceiling isn't raised, many, including President Barack Obama and the Treasury Department, warn that the country will risk unprecedented default. That default┬Ācould cause Americans to face rising interest rates. It┬Ācould also mean that the value of the U.S. dollar would drop compared to other currencies. As interest rates increase, the cost of borrowing rises, so individual mortgages, car loans and student loans could become significantly more expensive. As individual Americans' personal finances take a possible hit, some financial experts have warned that America's AAA credit rating could also be downgraded, threatening an already drooping stock market.

Late Saturday night, Reid announced a 12-hour delay on a key procedural vote on his debt ceiling proposal. The vote to end debate and break a GOP filibuster will now be held at 1 p.m. ET Sunday, as opposed to┬Ā1 a.m. Forty-three of 47 Senate Republicans signed a letter to Reid Saturday warning that they would not vote for his proposal as currently constituted.

Reid's plan would reduce federal deficits over the next decade by $2.4 trillion while raising the debt ceiling by a similar amount - meeting the GOP's demand that total savings should at least equal any total debt ceiling hike. Roughly $1 trillion┬Āof the savings is based on the planned U.S. withdrawals from military engagements in Afghanistan and Iraq. Reid's plan also would establish a congressional committee made up of 12 House and Senate members to consider additional options for debt reduction. The committee's proposals would be guaranteed a Senate vote with no amendments by the end of this year. In addition, it incorporates a process proposed by McConnell that would give Obama the authority to raise the debt ceiling in two steps while providing Congress the opportunity to vote its disapproval.