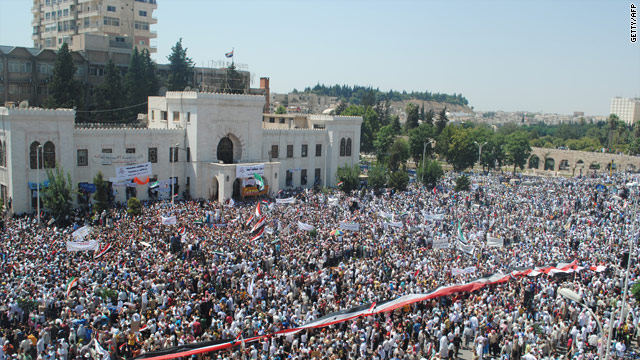 Syrians demonstrate against the government after Friday prayers in Hama.
August 1st, 2011
08:56 AM ET

Gunfire in Syria - Activists said shots erupted again in the Syrian city of Hama on Monday, a day after more than 70 people died in clashes across the country, including at least 50 there. CNN was unable to confirm the death tolls independently. There has been little break from the violence that has racked Syria for months as anti-government protesters have opposed President Bashar al-Assad's regime. Hama is considered the center of revolt.

Decision soon on U.S. hikersÂ  - An Iranian court could issue a verdict within a week in the case of two American hikers whoÂ  have been held in Iran for nearly two years, the hikers' attorney said Sunday. The hikers were arrested and accused by the Iranians of crossing into the nation illegally and being spies.

Attorney Masoud Shafiei, who represents Josh Fattal and Shane Bauer, argued Sunday that his clients were innocent of charges. A third hiker, Sarah Shourd, was released last year due to medical reasons.

"We can still appeal this decision if we disagree with it. But I am hoping for the best," Shafiei said after Sunday's hearing, which was the last court proceeding in the trial.

New Hampshire girl missing - More than 400 leads have poured in to authorities who spent the weekend hunting for missing 11-year-old Celina Cass. She was last seen at her West Stewartstown, New Hampshire, home a week ago. The girl's name is trending high on Google and other search engines Monday morning. Her father begged for the girl's safe return Sunday.

Clue in D.B. Cooper mystery? - The FBI says it is investigating a credible lead in the case of D.B. Cooper, who hijacked a passenger plane in the Pacific Northwest in 1971 and jumped out of the plane with a suitcase full of money.Â  The FBI calls the case "one of the great unsolved mysteries" in its history. Watch an agent discuss the case on "AC 360Â°" in 2008.