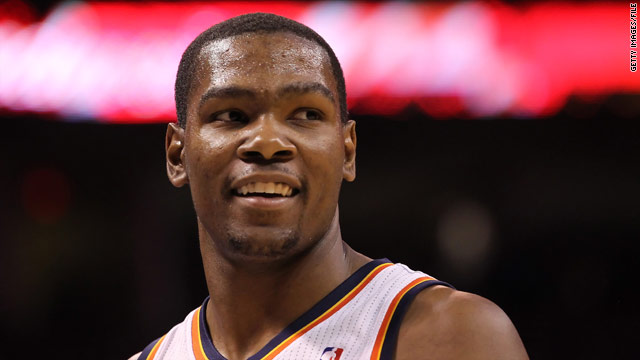 66-point explosion could turn out to be NBA's only highlight

It's not top of mind for casual sports fans - especially since the NFL just settled its lockout without much damage to players, owners, or fans - but the NBA is also in the midst of a labor dispute that's getting ugly.

After a meeting with the players union Monday, NBA Commissioner David Stern said he saw no reason for optimism, and on Tuesday, the league filed two lawsuits against the players, fueling fear that the NBA lockout could result in games or possibly the whole season being lost.

If you want to delve into the issues that divide the players and owners, NBA.com breaks it all down, but there's actually a positive basketball story with really cool highlights trending on Twitter right now featuring the league's leading scorer.

Kevin Durant, who plays for the Oklahoma City Thunder, scored 66 points in an exhibition game in New York's famed Rucker Park Monday night. ESPN has the details of the game and the significance of the storied court in Harlem.

In the trending video, you see what the game is really about and the joy it can bring to fans. Durant, wearing No. 21 in orange, drains 3-pointer after 3-pointer, the thrilled crowd gets on the court to celebrate with him, and you remember for these two minutes that sports is supposed to be fun.

The NBA and its players union still have time to make a deal and have a full season. NBA fans can hope that both sides will look at the video from Monday night and realize the value of their game goes beyond the billions they are struggling to divide among themselves.

9:03 pm ET June 5, 2020 RETWEET
Universal Orlando Resort in Florida reopened to the public on Friday after closing in March because of the coronaviâ€twitter.com/i/web/status/1â€¦6h
cnni

8:13 pm ET June 5, 2020 RETWEET
"We were wrong" NFL Commissioner Roger Goodell says the league should have listened to players earlier about racismâ€twitter.com/i/web/status/1â€¦8E
cnni