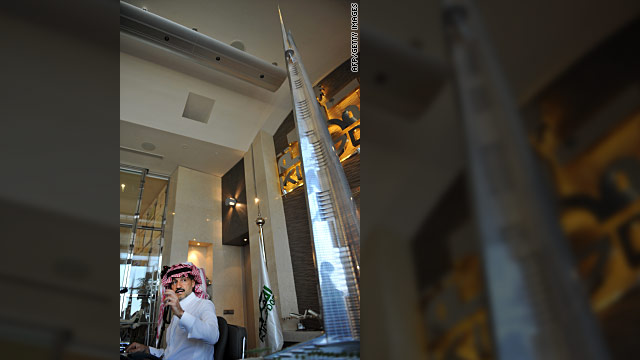 Kingdom Holding is paying Bin Laden Group, one of the world's largest construction companies, about $1.2 billion to take on the five-year project, according to Financial Times.

Saudi Bin Laden Group was founded in 1931 by Muhammad Awad bin Laden, the billionaire father of terrorist Osama bin Laden. It built much of Saudi Arabia's highways and infrastructure, as well as entire districts and cities.

The company constructed additions to the Muslim nation's two holiest mosques in Mecca and Medina. It operates throughout the Middle East and was chosen in 1964 to reclad the golden Dome of the Rock mosque in Jerusalem.

Over the years, Saudi Bin Laden Group has expanded into a conglomerate that includes engineering, manufacturing and telecommunications, according to business analysis site Hoovers.com.

Osama bin Laden, the 17th of 52 children, inherited part of his father's fortune, but his radical activities led the family to disown him in 1994.

The Chicago firm Adrian Smith + Gordon Gill Architecture designed the project and will oversee its development, Gulfnews.com reported. Adrian Smith was one of Burj Khalifa's designers when he was with Skidmore Owings and Merrill.

A study looked at monkeys that frequently steal items from humans and hold them in exchange for offerings of food.â€twitter.com/i/web/status/1â€¦9u
cnni

7:01 pm ET January 16, 2021 RETWEET
She alleges the state is threatening to â€śstack the chargesâ€ť if she publicly criticizes Fl officiawptv.com/news/state/arrâ€¦d7wa
susancandiotti

6:00 pm ET January 16, 2021 RETWEET
In an effort to protect against new coronavirus variants, the United Kingdom will close all travel corridors from 4â€twitter.com/i/web/status/1â€¦bM
cnni

5:00 pm ET January 16, 2021 RETWEET
The group wants to ensure that everyone has access to a secure, digital record of their Covid-19 vaccination â€” liketwitter.com/i/web/status/1â€¦Ld51
cnni