A North Carolina county has established checkpoints to stop visitors and non-resident property owners from entering‚Ätwitter.com/i/web/status/1‚Ä¶jn

Six people were injured in the tornado that swept through Jonesboro, Arkansas, the mayor told CNN affiliate KARK‚Ätwitter.com/i/web/status/1‚Ä¶P5 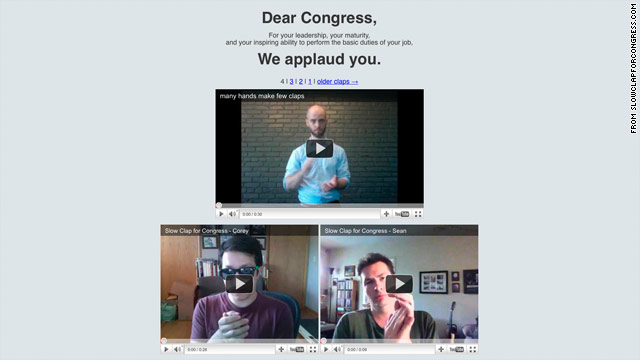 Congress gets (slow) applause for raising the debt ceiling

It started with a proposal on Sunday from just another American waiting to see how Congress would handle raising of the nation's debt ceiling.

"When the debt deal goes through can we start a meme where we all make videos of ourselves slowly & sarcastically applauding our politicians?" software developer Chris Ashworth tweeted Sunday.

As sarcastic proposals are wont to do on Twitter, the notion caught on, and by Monday, Ashworth had the website, slowclapforcongress.com up and running with a message to Congress:

"For your leadership, your maturity, and your inspiring ability to perform the basic duties of your job, We applaud you.

Since then, 43 YouTube videos have been uploaded to the site, featuring, as promised, Americans clapping slowly, wearing expressions that range from dour to stern, disappointed, sad, even flinty at times.

The site has made Ashworth in a viral sensation, and he's quickly learning the ropes of instant stardom.

North Korea fired an unidentified projectile into the sea off the coast of Japan, the sixth launch by the Kim Jong‚Ätwitter.com/i/web/status/1‚Ä¶2l
cnni

12:06 pm ET March 29, 2020 RETWEET
#FareedsTake: ‚ÄúAt some point we Americans must look at the facts and recognize an uncomfortable reality. The Unitedtwitter.com/i/web/status/1‚Ä¶fk22
cnni