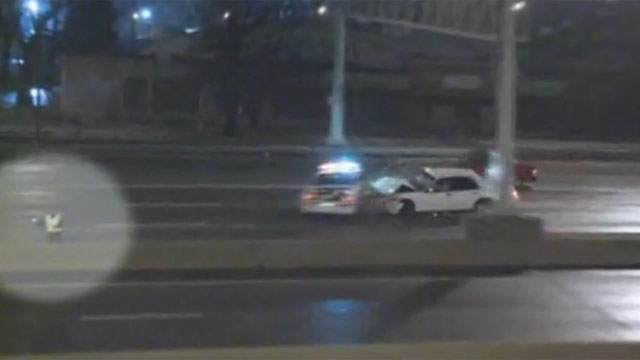 Police officers have extremely dangerous jobs. But the trouble they face goes beyond suspect shootouts, hostage situations and common criminal mischief. Sometimes hitting the streets means facing crazy car challenges. Youâ€™ve gotta watch these officers' near-misses with vehicles,Â all of which were caught on tape. Luckily, these riveting, canâ€™t-look-away-from videos ended with no serious injuries.

Not-so-routine traffic stop – Screeching tires eerily foreshadow whatâ€™s about to happen here. When a driver hits a parked car, a police officer adjacent to the collision is knocked to the ground. The officer received only minor injuries.
[cnn-videoÂ url="http://www.cnn.com/video/#/video/us/2010/03/13/vo.car.crashes.into.police.kmbc"%5D

Striking a police carÂ – Quick reflexes saved this officer when he hopped an interstate median to avoid being mowed down after a car hits his cruiser.
[cnn-videoÂ url="http://www.cnn.com/video/#/video/us/2011/03/16/am.police.car.hit.cnn"%5D