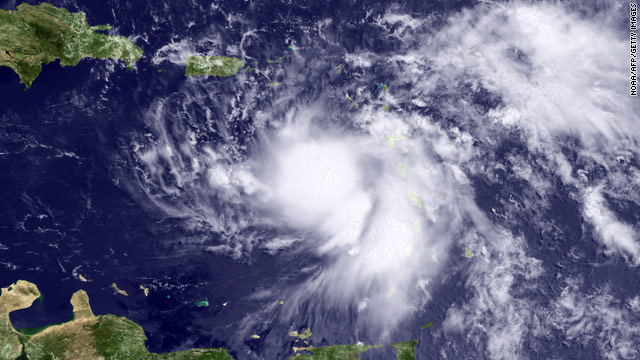 Tropical Storm Emily is moving toward the Dominican Republic and Haiti in the Caribbean Sea.
August 3rd, 2011
07:36 AM ET

Tropical Storm Emily - The government of the Bahamas issued a tropical storm watch in preparation for Emily, the storm that continues to churn toward the northeastern Caribbean, according to the National Hurricane Center. Emily is expected to strengthen slightly before moving over the Dominican Republic and Haiti by late Wednesday.

Post-deal market watch - Tuesday saw the Dow's biggest one-day loss in two months as double-dip recession fears run rampant. What will Wednesday bring? Also, CNN correspondents look at some of those who likely will get squeezed by the debt-ceiling deal: hospitals, airports, job-seekers and students.

Heat wave - Wednesday's forecast calls for a high temperature of 111 degrees in Oklahoma City, where the record high, 113, was set in 1936 during the Dust Bowl era. The heat wave, now in its second month, is responsible for record-setting electricity use in Texas, dozens of deaths across the U.S. heartland and a steady browning of the landscape.

Mubarak trial - An ailing former Egyptian President Hosni Mubarak was wheeled into a Cairo courtroom on a stretcher Wednesday. He is the first Arab leader to face a judge since the uprisings started in the region this year. Mubarak, 83, faces the death penalty if found guilty of corruption and ordering the killing of protesters. He pleaded not guilty Wednesday.

Syria unrest - A besieged Syrian city at the crossroads of the country's growing unrest now faces choked-off communications and a looming humanitarian crisis. The western city of Hama has been cut off from wireless and landline communications after tanks and armored personnel carriers rolled in, according to the London-based Syrian Observatory for Human Rights.

8:32 am ET April 11, 2021 RETWEET
For any human working or watching the #DerekChauvinTrial it‚Äôs emotionally draining especially if you‚Äôve been folltwitter.com/i/web/status/1‚Ä¶rKl2e8
sarasidnerCNN