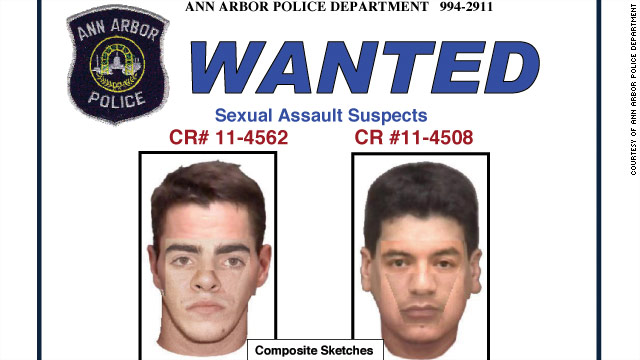 Parents and students of incoming freshman at the University of Michigan expressed concern this week in the wake of a series of sexual assaults near campus.

Six women were attacked within 11 days starting on July 15, said Lt. Angella Abrams of the Ann Arbor Police Department. In each incident, victims gave similar descriptions of their assailant, which yielded two composites.

In one incident on July 15, a woman reported that a man between 20 and 30 years old grabbed her as she spoke on her cell phone. The attacker - who she said had short, dark hair and olive skin - tried to drag her away, Ann Arbor police said. In another incident three days later, the victim said she was walking between two buildings on the edge of campus when a white man - about 20 years old and with dark hair and eyes - sexually assaulted her.

Though the number of perpetrators is unclear, police believe the incidents could be related but do not have any suspects in custody, Abrams said.

ŌĆ£ThereŌĆÖs a common description,ŌĆØ Abrams said. ŌĆ£ThereŌĆÖs a common M.O.┬Ā of what has occurred to the women. And weŌĆÖre also talking an 11-day period (of) criminal sexual assaults on women that have a common theme. That is not something that occurs, generally. This is a very safe town. This is 11 days of sexual assaults of women. That is highly unusual. That has led us to believe that we have a predator or predators who is preying on women.ŌĆØ

While rising college freshmen around the country are fretting over their laundry and fall course-loads, the University of Michigan class of 2015 is arriving on campus for orientation in the thick of an ongoing investigation, in which the FBI has been called in to assist Ann Arbor and campus police. Special Agent Sandra Berchtold confirmed that the FBIŌĆÖs Detroit field office is assisting in the investigation at the request of Ann Arbor law enforcement but could not provide details on when the assistance began or the specific help being provided.

Hillary Ginsberg, an incoming freshman from Chappaqua, New York, attended her campus orientation during the string of attacks. She said a university police officer briefed students on the situation as part of a routine talk about campus safety. Students, she said, seemed to have few questions for the officer.

ŌĆ£They told us not to worry and just to be safe when we were going out at night, never go anywhere alone, always be in groups, the more the merrier,ŌĆØ the 17-year-old said. ŌĆ£ItŌĆÖs definitely frightening that itŌĆÖs going to be happening where IŌĆÖm about to spend four years at college, but wherever you go in the world itŌĆÖs just important to be safe. Things like this can happen anywhere.ŌĆØ

Ginsberg said she and her peers were more excited to start school than they were frightened. She said the students in her orientation group may have spoken about the issue in passing, but the tone of the experience leaned much more toward anticipation.

ŌĆ£There were a number of questions from parents about these incidents. At the time we were there I donŌĆÖt think any of the incidents were on campus. They were all near campus. I believe that may have changed since thenŌĆØ Lisa Ginsberg said. ŌĆ£I think Hillary and I both feel that it is very scary and something to be aware of, but we also realize that those kinds of things, unfortunately, can happen anywhere.ŌĆØ

None of the attacks has occurred in the middle of campus, but the four most recent ones have been on its boarders, where university buildings blend into downtown Ann Arbor.

Two of the six victims have been University of Michigan students, said Diane Brown, public information officer for MichiganŌĆÖs campus police. Michigan, like many larger schools, has its own law enforcement agency, as opposed to just a campus security team.

Brown said campus police consider one of the cases that involved a Michigan student to have been an attempted robbery, while the other was a sexual assault, as were the four other attacks on non-students. As the attempted robbery occurred within the same area as the five other sexual assaults and the perpetratorŌĆÖs description was similar to those of the other cases, it is being included as possibly related to the other crimes. The victims were between the ages of 18 and 26, Brown said. Parents have taken notice and have contacted campus police with concerns, she said.

ŌĆ£When anything like this happens we get a lot of questions from parents, both of existing students and of incoming students,ŌĆØ Brown said.

ŌĆ£TheyŌĆÖre in the middle of a transition process for themselves,ŌĆØ Jones said. ŌĆ£TheyŌĆÖve got fears and worries about letting go and how their student is going to thrive independently. That normal parental anxiety is always there, so when they hear something like this has happened those concerns get heightened.ŌĆØ

Jones says she quells parental fears by explaining to them the safety resources that are available to Michigan students.

Parents also want to know what their students should be doing to protect themselves, said Holly Rider-Milkovich, director of MichiganŌĆÖs Sexual Assault Prevention and Awareness Center.

ŌĆ£Some have asked about self-defense options,ŌĆØ Rider-Milkovich said. ŌĆ£Some have mentioned wanting to go out and buy their daughters Mace, or other products. We want to make sure people are being thoughtful about that, encouraging them to be thoughtful about what's going to be most effective.ŌĆØ

Lisa Ginsberg said she has been forwarding her daughter news coverage of the case so that she remains aware of the situation. Both Ginsbergs said college-town safety has been on their minds in the wake of the June disappearance of Lauren Spierer, an Indiana University sophomore from Edgemont, a town near the Ginsbergs' New York home.

ŌĆ£ItŌĆÖs a terrifying story,ŌĆØ Lisa Ginsberg said. ŌĆ£I think certainly with two daughters close enough to that age - and quite frankly any child close to that age - itŌĆÖs a very scary thing. ItŌĆÖs a learning opportunity, a very sad and scary one, to have some extra lessons about watching out for yourself.ŌĆØ

Hilary Ginsberg said she is still looking forward to all aspects of college. She has been accepted into the Ross School of BusinessŌĆÖs competitive bachelor's of business administration program and plans to combine her interest in business with her love of theater. She is also looking forward to the independence that goes along with being responsible for her own safety.

11:00 pm ET August 13, 2022 RETWEET
@colbyhall Yes BUT he experienced being in hiding for a long time. ThatŌĆÖs what makes this so shocking. After everyotwitter.com/i/web/status/1ŌĆ”hsIQ
sarasidnerCNN

2:53 pm ET August 12, 2022 RETWEET
After being in hiding for years, living under constant threat of death simply for words he wrote years ago, ArthurŌĆtwitter.com/i/web/status/1ŌĆ”ve
sarasidnerCNN