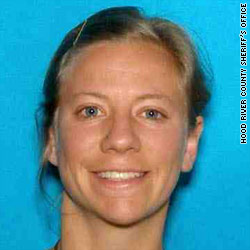 A Oregon woman was in a Portland hospital Wednesday after falling 50 feet from a wilderness cliff, breaking her leg in two places and surviving more than three days on wild berries, caterpillars and creek water.

An Oregon National Guard helicopter pulled Pamela Salant, 28, to safety Tuesday afternoon, more than three days after she fell from the cliff after going on a hike in the Mount Hood National Forest, local media reported.

"She's beat up but she's alive, and she's going to be OK," Salant's boyfriend, Aric Essig, told CNN affiliate KATU-TV in Portland late Tuesday. "She had moments of being scared, but she said she had moments where she was just very determined. ... It was down to survival. She thought she was going to die."

The two had gone in separate directions around noon Saturday in search of a better campsite near Bear Lake, according to the TV station.

"I walked all around the lake expecting to meet up with her at some point, and I walked all the way back to the camp and just didn't see her," Essig told KATU. He called the sheriff's office after she hadn't showed up by Sunday morning.

A copter spotted her Tuesday afternoon sitting on a log near a creek. She had no camping equipment or survival gear with her when she got lost, deputies told CNN affilate KOIN-TV in Portland.

Hood River sheriff's Detective Matt English told KOIN that Salant ate berries and catepillars for nourishment. Essig told KOIN his girlfriend covered herself in moss for warmth and tied her underwear to stop bleeding on a deep cut on her knee.

Family members told CNN affiliate WHDH-TV in Boston that Salant was an experienced hiker, but they hadn't talked to her since her rescue.

Now they can't wait to hear from her.

â€śI thought Iâ€™d never see her ever again,â€ť her brother, Peter Salant, told WHDH. â€śI was hoping - there was so much I had never told her that I was hoping Iâ€™d get a chance to say, and now I do.â€ť

The injured woman, in a statement from Legacy Emanuel Medical Center in Portland, said she would speak to the media next week.

Personal touches, exclusivity, security, discretion -- these are the things that world leaders have come to expectâ€twitter.com/i/web/status/1â€¦mt
cnni

7:45 am ET October 21, 2021 RETWEET
Singapore will extend its Covid-19 restrictions for another month after the city-state reported 18 new deaths fromâ€twitter.com/i/web/status/1â€¦FC
cnni

7:15 am ET October 21, 2021 RETWEET
Record-breaking rains and heavy flooding have killed at least 150 people in India and Nepal this week, according toâ€twitter.com/i/web/status/1â€¦Br
CNNweather

7:13 am ET October 21, 2021 RETWEET
As India celebrated passing the milestone on Thursday, some experts warned the pandemic threat was not over -- in aâ€twitter.com/i/web/status/1â€¦SM
cnni