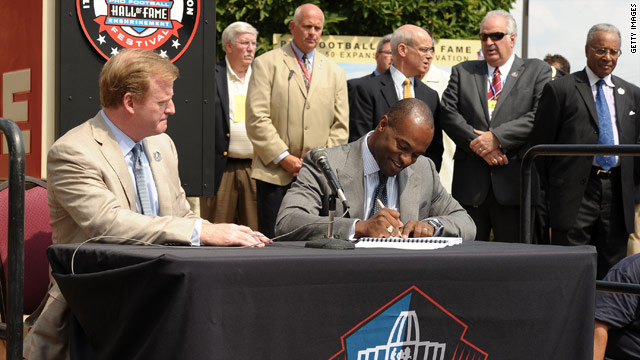 NFL players on Thursday ratified a 10-year collective bargaining agreement, officially ending the labor dispute that had threatened to delay the start of the 2011 season, the league said.

Most of the deal was agreed last week, when the NFL owners ended a 4Â½-month lockout and allowed most players to return to work and sign contracts. But some details needed to be ironed out, and teams' new signees couldn't practice until those details were settled and the final deal ratified.

"Congrats to our players & teams and thank you fans for your patience. The NFL will be better than ever," NFL Commissioner Roger Goodell posted on Twitter Thursday evening.

The season's first regular season game is scheduled for September 8, when the Green Bay Packers host the New Orleans Saints. All preseason games are intact except for the Hall of Fame Game, which was supposed to be played this Sunday but was canceled because last week's agreement came too late.

Some new signees joined their new teams' practices as they were in progress Thursday afternoon, after the deal had been ratified. The Detroit Lions' new players began participating only 10 minutes after practice for the rest of the team began, according to the Lions' website. The Cleveland Browns, wary of having the new players jump in before the ratification was announced, took the new players' helmets away until the word came down, coach Pat Shurmur told reporters, according to the Browns' website.

"That kept them from jumping in there without us seeing it," Shurmur said.

Tiny bits of plastic from your packaging and soda bottles could be traveling in the atmosphere across entire continâ€twitter.com/i/web/status/1â€¦js
CNNweather

10:06 am ET April 13, 2021 RETWEET
Rain on other planets is something scientists are still striving to understand, but new research has suggested rainâ€twitter.com/i/web/status/1â€¦pl
CNNweather

8:04 am ET April 13, 2021 RETWEET
Some Americans across the country are fleeing their homes from wildfires and other effects of climate change, askinâ€twitter.com/i/web/status/1â€¦Fo
CNNweather