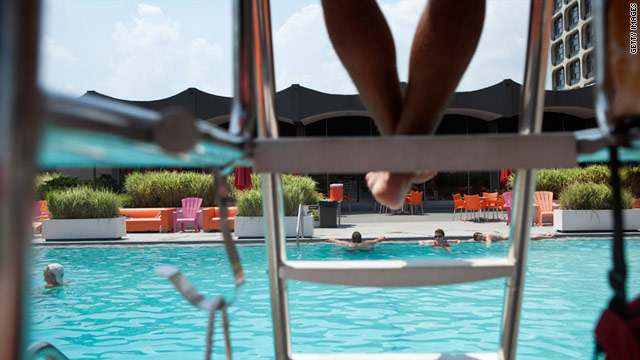 Overheard on CNN.com: Too hot for football

"How many people have to die before people will put human life above a football schedule? Move the schedule back; we are starting football practice way too soon these days."–HPNIII

"Football practice always started 2 weeks before school starts, and, FYI, it is hot in the South. Note to self: keep hydrated."–turbay22

15 states under advisories as heat wave holds tight across South

Texas has been struggling with 100-plus temperatures and its worst drought ever, and at least three young athletes and a coach have died from the heat in four states. Most CNN.com readers wondered why anyone would hold athletic events in such heat.

chadley25 said, "In the South–and by extension, Texas–football is a religion. And, you know, if a few kids have to keel over and die in the pursuit of that 6A championship, well, it's a noble sacrifice. (Sarcasm!)"

bybyaol said, "What kind of depraved, irresponsible coach would make a a team practice in such ridiculous conditions? And then this race? Obviously people must die before the organizers say, 'Oh, hey, maybe it is too hot'!"

easytolove said, "We have to teach our boys to be tough! I say, get out there and tough it out. Show those other guys you're tougher than they are. Play football in the 100-degree heat until you beat out the other guy even if he has to fall down and needs an ambulance!"

MiaGia said, "I live in a little town about an hour from Fort Worth, Texas. These ungodly temperatures have placed the wildlife in a horrible situation. Deer are coming up to our house during the day, in the open, searching for water. There will be no acorns, no berries, no fruit, no pecans, not even seeds from flowers or grass for the oncoming fall and winter. It will be late spring before wildlife receive any relief. The situation is dire."

Guest said, "Isn't it time Dallas and other cities stopped rolling miles of concrete and asphalt and instead start setting parks, greens, gardens? How about a little public transportation focus instead of the over reliance on the big trucks?"

Asklepios417 said, "I saw a cartoon once of a couple of dinosaurs grazing in a field. They see a massive meteor approaching. 'Oh it's probably nothing,' says one."

Kelly Thomas, a homeless, schizophrenic man, died in police custody after having been beaten by six police officers. His arrest was captured on videotape, including his calls for his father. The police officers have been placed on involuntary administrative leave. CNN.com readers were outraged.

somfincute said, "This is just beyond horrifying." DoeEyedgrl replied, "Especially when you see the picture of what they did to his face. I can't get that image out of my mind." whatdoweknow said, "He must have loved and trusted his father, because he was calling 'Dad, Dad, Dad!' I guess at a time like that you would call out to the person you needed the most. It is the helplessness of those cries that are so haunting."

5xad0w said, "A man suffering a heart attack in holding is an 'in-custody death.' Beating a man beyond recognition while he is restrained on the ground is distinctly different." MPfilipina said, "So I'm supposed to believe 6 cops needed to make a guy's face and head like this to arrest him? Six cops with Tasers, and this is the result? I am the first to give the police the benefit of the doubt, but this one is hard to swallow. Raising your arms to stop blows to the head is not resisting."

RealSci said, "The son wanted to live homeless by choice. He was mentally ill. The parents got him into treatment and he was taking anti-schizophrenic meds, but then stopped taking them. You can't force a 37-year old to be institutionalized."

zoelawrence said, "The police were called to the area because they had a report of someone looking into cars. There was no proof that that person was Thomas. When they arrived he was sitting on a bench in the area, and initially they only wanted to question him. He's mentally ill and weighed 135 pounds, was unarmed, and begging for his life. They kept beating him after he was unconscious."

Spiderman icon Peter Parker, who "died" in Marvel Comics' Ultimate Universe, has been replaced with a character Marvel Comics believes is more representative of the 21st century: Miles Morales, a half Latino, half African-American math-loving teenager who lives with his parents. Peter Parker, a white orphan from Queens, died in Ultimate Comics Spider-Man #160 fighting his arch-enemy, Green Goblin.

CNN.com readers argued over whether replacing Peter Parker was a good idea. olkvgn said, "For me, as an 'older' person, Spiderman will always be Peter Parker. That said, no art form can maintain the same tone and theme forever. I think this is a brilliant way to reflect contemporary times, and rejuvenate the stories."

BlackConvoy said, "Why are people so upset about this? This is a good thing. Alan Moore said a long time ago that the stories for a lot of these comic-book characters should have ended. He was right. When you have characters that have been around for 40-70 years you run out of ideas of what to do with them."

qed3deq said, "If you're going to kill off the current incarnation of a prime-time superhero, and replace it with a variation, he better be demonstratively different, or what's the sense of killing off the original in the first place?"

Many, like iReporter omekongo, said it would be better to create new ethnic characters than to change the race of one that is already well established.

omekongo said, "Sorry guys, I'm not really feeling a Black/Latino Spiderman. I'm all for diversity, and poor white folks don't own the license on radioactive spiders, but I don't like the new Ultimate Spiderman story line. I want more people of color in the comic-book world, but I believe that new characters should be made with their own stories. I never wished for a black Wolverine or Cyclops. Conversely, I don't want to see a white Storm character. Make new diverse characters who are special in their own right and have their own histories."

Fillo agreed, "I almost see it as Spiderman in blackface. They should've just called him 'SpiderBro.' You're right on the money that if they want more minority heroes they should take the time to create new ones, not just choose a different ink when drawing one of the white ones. Very weak. No imagination left? Bring back Power Man, for God's sake."

citizenUSA said, "I don't care who they want to model a superhero after or update an image, but to dramatically recreate an existing one is absurd. We value our heroes for what they are, not how they look. It's like making a white version of Muhammad Ali."

Samuel1956 said, "And in related news it was revealed that Odie, the dog in the Garfield cartoons, will now be a pitbull."

This is the scene before curfew just outside the #BrooklynCenter police precinct . Protestors kneeled for nine minu‚Ätwitter.com/i/web/status/1‚Ä¶XF
sarasidnerCNN

10:37 pm ET April 13, 2021 RETWEET
The hours of peaceful protests broken a half hour after curfew ended. While most folks are just yelling water bottl‚Ätwitter.com/i/web/status/1‚Ä¶cZ
sarasidnerCNN

10:25 pm ET April 13, 2021 RETWEET
A history of being consistently active is strongly associated with a reduced risk of severe Covid-19, according to‚Ätwitter.com/i/web/status/1‚Ä¶wX
cnni