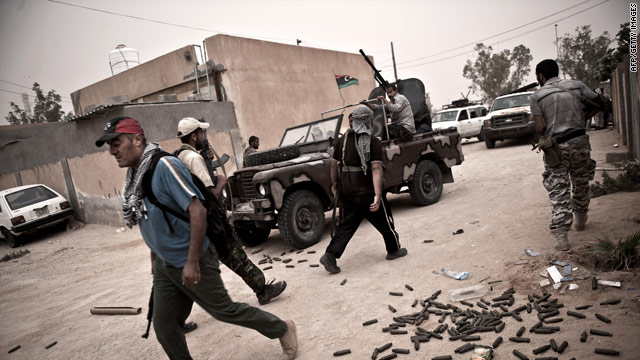 Libyan rebels rendezvous at their vehicle during a battle in the village of Josh in western Libya.
August 4th, 2011
01:19 PM ET

The front lines of Libya's grinding war weave through the western mountains and around Zlitan, the last city east of Tripoli still under the grip of strongman Moammar Gadhafi.

In many places that Gadhafi's forces have fled, they've left behind deadly fields of mines - tens, perhaps hundreds of thousands of them, say the rebels.

Not only do they pose a danger for civilians but they also have slowed the advance of the rebels in their march toward Tripoli.

Here in Qawalish, a town 60 miles southwest of Tripoli where fierce fighting has taken place in recent weeks, the war looks like this: Men in no protective gear sift through a public park to fight an enemy that can kill instantly and indiscriminately. Here, the enemy is Gadhafi's landmines.

Milad al Saidy and his fellow "sappers," as those who work with mines are known, are armed only with simple metal probes and a couple of metal detectors. A burned-out shell of a car sits as evidence of what the mines can do.

So far, they say, about 2,500 mines have been discovered, all left by fleeing pro-Gadhafi forces.

Al Saidy has been doing this work for 16 years but many others are green - fresh recruits who volunteered for a potentially deadly job. Some learn on the job. Amazingly, al Saidy said, no one has been killed or hurt.

"It's very, very dangerous but people are insisting they want to work with us to secure the lives of the innocent, the children, so families can come without the fear of landmines," he said.

The free app rewards students for staying off their phones during class, using an in-app currency that can be redee‚Ätwitter.com/i/web/status/1‚Ä¶xO
cnni

5:21 am ET September 23, 2021 RETWEET
The United States Olympic & Paralympic Committee said all US athletes hoping to compete at the 2022 Beijing Winter‚Ätwitter.com/i/web/status/1‚Ä¶MT
cnni

5:19 am ET September 23, 2021 RETWEET
In an exclusive interview with @cnnsport, Chelsea striker Romelu Lukaku has urged the CEOs of social media companie‚Ätwitter.com/i/web/status/1‚Ä¶1s
cnni