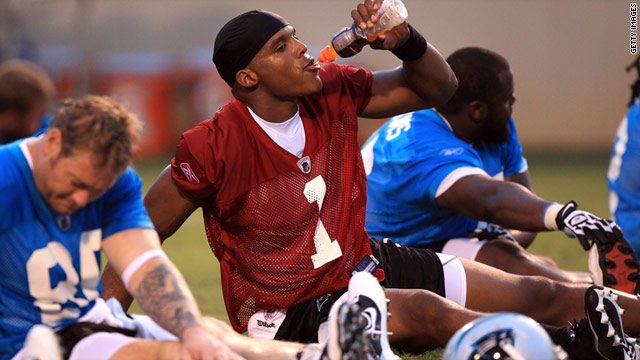 There are no nationwide rules written to protect high school athletes from sudden death due to hot weather.

Atlanta Public Schools on Wednesday banned all outdoor student activities until after 6 p.m. through the end of the week because of high heat and humidity in the region. The restriction covers all grades at all schools and includes football, other sports and band practices. Many coaches and band directors have moved practices indoors, the district said.

"We think it was the worst week in the last 35 years in terms of athlete deaths," said Dr. Douglas Casa, chief operating officer of the Korey Stringer Institute of health medicine at the University of Connecticut and author of the book "Preventing Sudden Death in Sports and Physical Activity."

Korey Stringer was a Minnesota Vikings player who died of heat stroke in 2001. His widow, Kelci Stringer, worked with Casa to create the institute to improve prevention.

There is the National Federation of State High School Associations that governs high school sports, and several states have issued guidelines on heat training to high schools.

"But unfortunately, they are powerless," Casa said. "It's not like the NCAA, where they mandate rules and the colleges have to follow them. The high school association can make some recommendations, but they don't have any power or teeth to have those policies actually implemented."

Casa said a task force made up of professionals from the top medical organizations in the country came together three years ago and produced a set of guidelines similar to those of the NCAA. The NCAA guidelines have been in place for eight years and there's been only one heat-related death on a college football field since then.

One guideline is to have an athletic trainer on the field at all times - a person trained in sports medicine who can not only recognize the signs of heat-related issues but also treat them.

During August football practices in extreme heat, Casa said, most high schools have only the coaches on the field.

"So the coach is the one actually caring for these kids when they're in a life-or-death situation, which should scare the living daylights out of every parent in our country," he said.

Some high schools have put these guidelines into practice. At Bishop Alemany High School in the San Fernando Valley of Los Angeles, where temperatures during August practices reach more than 100 degrees, head coach Dean Herrington says they do have a trainer on the field and more.

"We have a water trough on the side and our players know they can (use it) at any time during practice," he said.

Casa says it's not just about water.

"Heat strokes are completely survivable," he said. All that may be needed is an immersion in a cold-water tub or pool. An athlete who is immediately cooled can survive, but many schools and coaches just call 911, he said. Casa said while they wait for an ambulance the brain and vital organs continue to cook in the heat. The body can only withstand such extreme conditions for about 30 minutes.

Saudi Arabia may not be the country many people think it is. cnn.it/3Se5KoC
cnni

6:33 am ET September 25, 2022 RETWEET
If the real-life DART succeeds in its mission, we may be able to chill out more when asteroids start coming too cloâ€twitter.com/i/web/status/1â€¦YD
cnni

Saudi Arabia may not be the country many people think it is. cnn.it/3Se5KoC
cnni

6:33 am ET September 25, 2022 RETWEET
If the real-life DART succeeds in its mission, we may be able to chill out more when asteroids start coming too cloâ€twitter.com/i/web/status/1â€¦YD
cnni