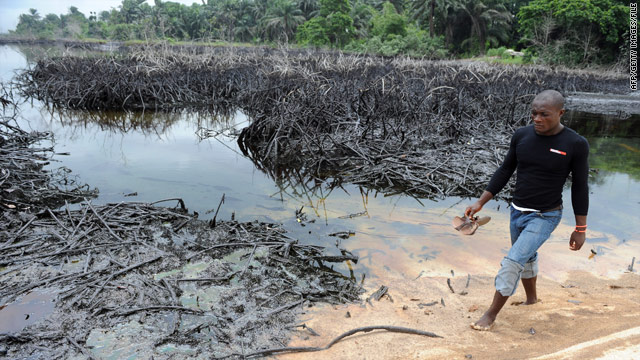 A man walks along the oil-fouled edge of the Niger Delta swamps of Bodo, a village in Nigeria's oil-producing Ogoniland region.
August 4th, 2011
12:58 PM ET

The assessment, commissioned by the Nigerian government and funded by oil giant Shell, comes on the heels of the company admitting liability for two spills in Nigeria. A spokesman said Shell welcomed the report.

"We will study the contents carefully and will comment further once we have done so," the spokesman said.

Nigeria's Niger Delta, the world's third largest wetland, is diverse and rich with mangroves and fish-rich waterways. But oil drilling has turned it into one of the most oil-polluted places on Earth with more than 6,800 recorded oil spills, accounting for anywhere from 9 million to 13 million barrels of oil spilled, according to activist groups.

But the environmental disaster has never received the kind of attention paid to last year's oil catastrophe along the Gulf Coast.

Amnesty International, which has researched the human rights impacts of pollution in the Delta, said people in the region have experienced oil spills on par with the Exxon Valdez disaster every year for the last half century.

Nepal's population of one-horned rhinos has increased to its highest number in more than 20 years, partly owing toâ€twitter.com/i/web/status/1â€¦d3
cnni

1:31 am ET April 15, 2021 RETWEET
A geophysicist who allegedly beat police officers who were trying to help injured rioters during the US Capitol sieâ€twitter.com/i/web/status/1â€¦Of
cnni