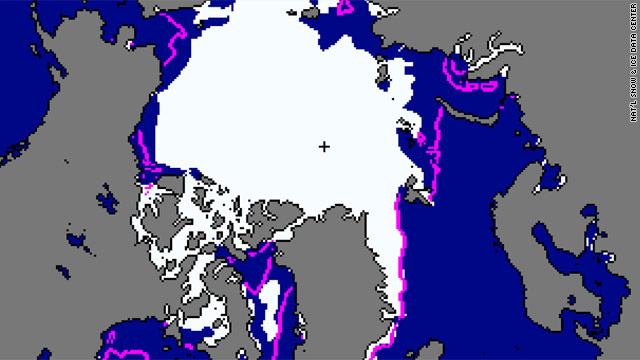 The Arctic will be practically ice-free during the summer within three decades, the top U.S. ice observer says. But climate change could bring some good with the bad, he adds.

"I'm a climate scientist, but I'm also a realist on this," said Mark Serreze, director of the National Snow and Ice Data Center.

Arctic sea ice is disappearing a little more each summer. It shrank in July to the least coverage that satellites have ever recorded for that month, measurements show.

"This is just part and parcel of the decline that we've seen in the overall ice extent because the Arctic is warming up," Serreze said.

Satellite records date to 1979, but observations by ship and plane go back to the 1950s, Serreze said. July's ice coverage "is certainly the lowest in oh, the last 50 or 60 years that we have reliable records for," he said.

The oldest ice in the Arctic, which tends to be the thickest and most resistant to melting, is declining, data center scientists said.

The overall ice coverage declined rapidly in the first half of July but slowed in the second half as weather patterns changed, Serreze said. Now they seem to be changing back again. By the time the melting season ends in September, the ice coverage could be among the lowest three or four ever, he said.

"The Arctic is the heat sink of the Northern Hemisphere," Serreze said. "The ice cover is highly reflective. If you lose that ice cover, you change the heat budget of the Arctic."

That changed budget is likely to affect weather patterns below the Arctic, and ultimately the overall climate, he said.

"This is man-made; there seems to be little doubt in that," Serreze said. "It would be reversible if we were to do something about our carbon dioxide emissions, (but) I don't see much of a fat chance in hell we're going to see any change here. We're going to have to adapt."

Climate change will have some serious consequences, Serreze acknowledged: rising sea levels, loss of habitat for Arctic fauna, drinking water shortages, territorial disputes over newly open waters and more. But there will be some real benefits, he said.

Warmer winters and springs will extend growing seasons and even allow farming to happen in places where it hadn't before, Serreze said.

Another benefit of the retreating ice is increased navigation. A tanker set sail from Murmansk, Russia, on June 29 and completed a crossing of the Kara and Barents seas on July 14, according to the data center. The same company plans to send six or seven more ships along the same route this summer.

"We will adapt, because we have to," Serreze said.

This year, cherry blossom season has come and gone in the blink of an eye, in one of the earliest blooms on record‚Ätwitter.com/i/web/status/1‚Ä¶cU
cnni