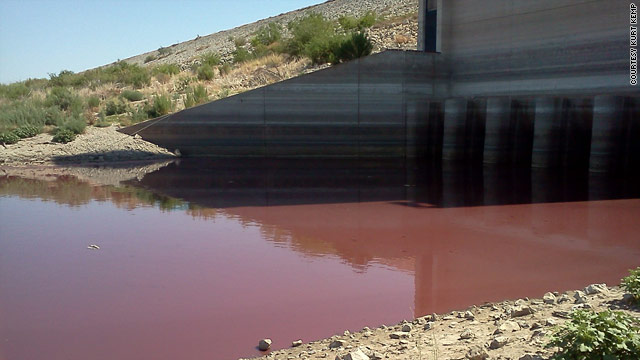 'Blood lake' a product of drought

A Texas reservoir has turned a deep red, prompting a pastor to speculate it's a sign of the coming Apocalypse.

But the Texas Department of Fish and Wildlife says it's just an indication of how bad the current drought is. About 99% of Texas is under drought conditions, according to the U.S. Drought Monitor.

The Texas Department of Fish and Wildlife says water levels in the reservoir receded, which, mixed with the warm weather, helped lower oxygen levels. The low oxygen levels prompted a fish kill and spurred the growth ofÂ  bacteria called Chromatiaceae, which thrive in such conditions. Chromatiaceae are purplish in color, prompting the "blood" red descriptions.

Texas Department of Fish and Wildlife says the reservoir will be restocked with fish as soon as the drought ends and water levels return to normal.

The Texas drought has emptied several other lakes, including one in East Texas. The receding water revealed a part of the space shuttle Columbia, which broke up over Texas in 2003, at the bottom of the lake.

Listen to the full story:

7:00 am ET October 20, 2021 RETWEET
Chinese authorities have offered a bounty equivalent to more than $23,000 for the capture of a North Korean defectoâ€twitter.com/i/web/status/1â€¦sr
cnni

6:20 am ET October 20, 2021 RETWEET
After California saw its driest year on record in nearly 100 years, the entire state is now under a drought emergenâ€twitter.com/i/web/status/1â€¦nb
cnni