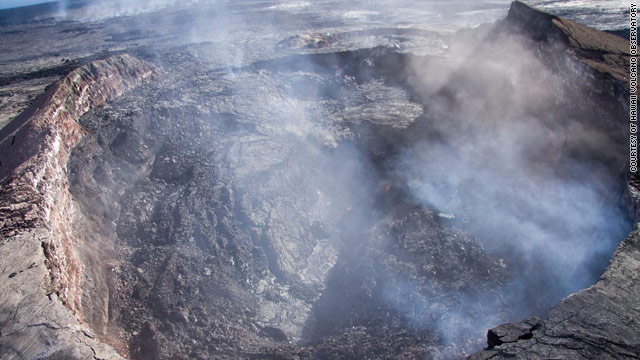 The lava-filled crater in Hawaii's Kilauea volcano collapsed more than 250 feet Wednesday, according to the Hawaii Volcano Observatory.

The Puu Oo crater, which holds a lake of lava inside the cone at Kilauea's summit, last collapsed in March. Wednesday's collapse created a lava flow that split into two directions and closed a portion of Hawaii Volcanoes National Park. It did not affect any areas outside the park's boundaries.

Click here to see a collection of footage, photos and time-lapse video of the lava-spewing crater

According to an update from the Hawaii Volcano Observatory on Thursday night, "The crater rim remained extremely unstable, with continued collapses along the crater walls sending blocks of rock onto the crater floor."

Kilauea has been erupting continually since 1983. Hawaii's volcanoes erupt effusively, meaning runny lava bubbles up and flows out, as opposed to building up pressure and exploding violently.