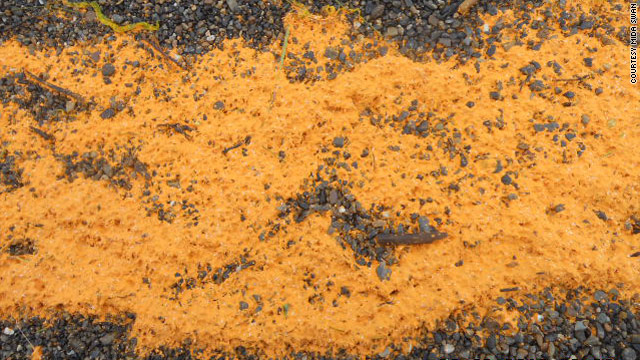 This orange substance was found on the shore of Kivalina, Alaska, on Wednesday, residents say.
August 5th, 2011
09:44 PM ET

State and federal scientists are trying to identify a mysterious orange substance that washed up on the shore of a village in northwestern Alaska this week.

Residents on Wednesday noticed an orange sheen in the lagoon in front of Kivalina, Alaska, and clumps of the substance on the beach, city manager Janet Mitchell said. 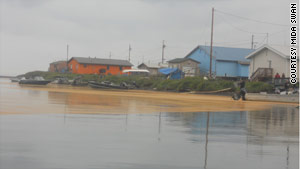 An orange sheen could be seen in the lagoon.

The stuff on the shore had "an oily feel to it, like baby oil," resident Mida Swan said Friday. SheÂ said she detected no odor from the substance.

The substance also may have rained down on the village Wednesday evening, because it was found in buckets that some residents used to collect rainwater that night, Mitchell said.

Hignutt said it's not immediately clear what the substance is.

"There doesn't appear to be any evidence of a release of oil or hazardous substances at this time, but we're continuing to investigate and try to get lab determinations on what exactly the material is," Hignutt said.

"What it is - an algal bloom, or something inorganic - that's what we're working to get some more information on," he said.

Mitchell said the substance also was found in the Wulik River, which flows into the lagoon and is a source of the village's drinking water. She said the village would delay topping off its water storage tanks, which it does every summer so that it has enough water for the winter, until the substance is identified.

Kivalina, a village of about 430 people, is about 650 miles northwest of Anchorage, Alaska.

8:27 pm ET July 25, 2021 RETWEET
Fourteen years after the final episode of "The Sopranos," James Gandolfini's son will take over the role of Tony Soâ€twitter.com/i/web/status/1â€¦J5
cnni

8:01 pm ET July 25, 2021 RETWEET
If you're looking for one of the most efficient cardio workouts that anyone can do anytime, anywhere, you only needâ€twitter.com/i/web/status/1â€¦L0
cnni

6:01 pm ET July 25, 2021 RETWEET
RT @peterbakernyt: A conservative radio host in Tennessee who had expressed unwillingness to be vaccinated is now hospitalized with Covid pâ€¦
susancandiotti