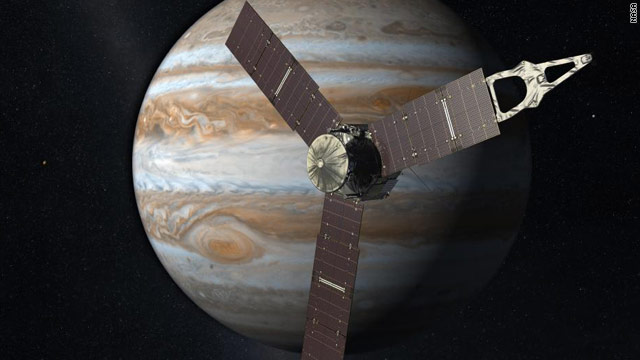 The Mission Juno satellite launched into clear blue skies Friday, beginning a five-year journey to the largest planet in our solar system - Jupiter.

NASA launched the $1.1 billion satellite from Cape Canaveral, Florida at 12:25 p.m., after almost a decade of building and testing the spacecraft.

A minute technical issue and a boat inside the launch safety zone delayed lift off through several holding periods. The satellite was originally scheduled to launch at 11:34 a.m.

Mission Juno will offer an unprecedented look beneath the clouds of Jupiter and offer insight into how the solar system was formed, NASA said.

Juno was launched atop an Atlas V 551 rocket, one of the world's most powerful, NASA said. The rocket can reach a top speed of 4,500 mph and is expected to reach Earth's orbit in about 10 minutes.

After parking in orbit, a second booster will fire, sending the rocket on it's way to Jupiter, the site said.

Once Juno separates from the rocket, its three solar arrays - each the size of a tractor trailer - will unfold and face the sun. The energy the panels absorb from the sun will power the rocket throughout the mission, the site said.

After circling the inner ring of the solar system for two years, the craft will use the Earth's gravitational pull to sling itself toward the gaseous planet. By 2016, Juno will have traveled the 400 million miles to reach Jupiter, according to the mission's website.

Jupiter is key to understanding the solar system because it's believed to be the first planet to exist after the formation of the sun, said Scott Bolton, principal investigator for the mission, told reporters last week.

"It got the majority of the leftovers after the sun formed," Bolton said. "We want the ingredient list."

He added that the mission will investigate, among other things, what lies in Jupiter's core. Jupiter is nearly 1,300 times larger than Earth.

The spacecraft will be the first solar-powered satellite to journey as far as Jupiter, Bolton said. Other NASA missions to Jupiter, like Galileo, have used nuclear fuel.

The craft will periodically communicate with NASA engineers on Earth and is programmed to respond to glitches and unexpected trouble, NASA said.

A depleted Tunisia side stunned three-time champion Nigeria to reach the quarterfinals of the Africa Cup of Nations cnn.it/32uAz40
cnni

7:15 am ET January 24, 2022 RETWEET
Dozens of Chinese officials have been punished over their response to devastating floods that killed hundreds lastŌĆtwitter.com/i/web/status/1ŌĆ”ee
CNNweather

7:00 am ET January 24, 2022 RETWEET
President Joe Biden discussed options for bolstering US troop levels in the Baltics and Eastern Europe with his topŌĆtwitter.com/i/web/status/1ŌĆ”qT
cnni