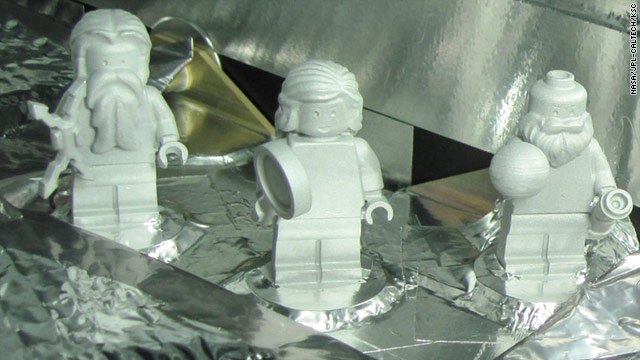 LEGO mini-statues of the mythological god Jupiter, left, his wife Juno, and the astronomer Galileo will be aboard the Mission Juno satellite.
August 5th, 2011
06:02 AM ET

On the Radar: Jupiter mission, jobs for vets, Tiger's return

Jupiter mission: NASA plans to launch its Mission Juno satellite on Friday to begin a five-year, 400-million-mile journey to Jupiter that the space agency hopes will help reveal how our solar system was formed.

Mission Juno will offer unprecedented insight into the formation of our solar system by investigating what lies underneath Jupiter's atmosphere, astronomers said at Kennedy Space Center. Jupiter is known for its violent storms and gaseous atmosphere.

Scott Bolton, principal investigator for the mission, said Jupiter - which is 1,300 times larger than Earth - holds a key to understanding the solar system because it's believed to be the first planet to have formed after the sun.

While this is not a manned mission, the satellite will carry a crew of three LEGO figures, 1.5-inch-tall likenesses of Galileo Galilei, the Roman god Jupiter and his wife Juno.

Galileo is credited with several discoveries about Jupiter, including finding four of its moons. The LEGO figurine will carry a telescope to salute this.

The mythological Jupiter was a mischief-maker who surrounded himself in clouds. Juno was able to see through those clouds to see what her husband was up to. The LEGO Juno will carry a magnifying glass on the mission while Jupiter carries a lightning bolt.

LEGO is partnering with NASA to promote children's interest in science, math, engineering and technology.

In a speech at the Washington Navy Yard, the president is expected to lay out a series of reforms that his administration is pledging will better prepare service members for the civilian work force and encourage employers to hire recent veterans.

Among the president's proposals will be a "Returning Heroes and Wounded Warrior Tax Credit," which would provide businesses that hire veterans a tax break, varying in size depending on how long the newly hired veteran has been unemployed and whether he or she has a disability.

Tiger's comeback: Tiger Woods begins the second round of his comeback after three months off from golf due to injury. After one round of the World Golf Championships Bridgestone Invitational in Akron, Ohio, Woods is six strokes behind leader Adam Scott.

Sports Illustrated senior writer Gary Van Sickle looks at what Woods showed us in shooting a first-round, two under par 68.

6:15 am ET May 23, 2022 RETWEET
In Thurstan Redding's photography series "Kids of Cosplay," the mundane and the fantastical collide in unexpected wâ€twitter.com/i/web/status/1â€¦Z9
cnni

6:00 am ET May 23, 2022 RETWEET
Manchester City has apologized after Aston Villa goalkeeper Robin Olsen was said to have been "assaulted" followingâ€twitter.com/i/web/status/1â€¦6a
cnni

5:45 am ET May 23, 2022 RETWEET
The age of appeasing North Korea is over and any new talks between Seoul and Pyongyang must be initiated by North Kâ€twitter.com/i/web/status/1â€¦Yc
cnni

5:29 am ET May 23, 2022 RETWEET
More cases of a rare disease have been reported worldwide, including in the United States -- where one health officâ€twitter.com/i/web/status/1â€¦UR
cnni