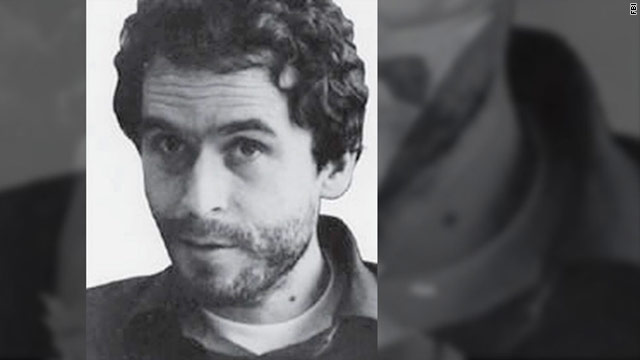 Notorious serial killer Ted Bundy confessed to more than 30 murders before he was sent to Florida's electric chair in 1989.
August 5th, 2011
03:58 PM ET

Overheard on CNN.com: What creates a psychopath?

Comment of the day:
"Ted Bundy is the creepiest serial killer ever. At least the ones like Jeffrey Dahmer or John Wayne Gacy were noticeably weirdos. You could tell something was off just by looking at them. Not this guy. He was witty, charming, and a sharp-looking dude. He could've been your neighbor or co-worker, and you would never have known.
- Bassdude

A reopened missing-child case has spurred investigators to retrieve a vial of executed murderer Ted Bundy's blood and profile its DNA. The missing child, 8-year-old Ann Marie Burr, lived along the newspaper route of then-teenager Ted Bundy, who denied a connection to the case. When Bundy was convicted, DNA typing was not widely used, but advances in the forensics field have revitalized efforts to link serial killers to unsolved crimes. CNN.com readers recalled Bundy and wondered what created psychopaths.

Asklepios417 said, "No one was ever more justly executed than Ted Bundy."

di56 said, "I remember when his trial was going on. Even then young women were saying they didn't believe he did all those terrible things because he was so handsome. He was a one-of-a kind killer. Hopefully, his blood will give some closure to families. It would be the only good thing he ever did."

emma65 said, "Anne Rule wrote the book 'The Stranger Beside Me' about Bundy, whom she knew personally. She had a hard time accepting that he was a killer even after she saw the evidence. I think I remember her saying how nice he had been to her and even insisted on walking her to her car to protect her at night. Yet he was already a killer then."

meewee said, "He was a human predator of the worst kind! His skills were honed to perfection. His appearance, his demeanor, everything was geared towards one thing: preying upon innocent victims."

DoriLambert said, "His last victim was a 12-year old girl, so I really don't think this is out of the realm of possibility."
di56 agreed: "It is very likely that he was the killer of this child. His tendencies for murder appear to have started when he was young. If he was killing during his teen years then a younger, smaller target would have been a prime target. It takes years for a serial killer to become proficient; hopefully he made enough mistakes to allow the authorities to close this case."

onlyinameric said, "What a dangerous combination of charm and cruelty! Bundy wasn't a genius, but he did have a good education, and was well spoken, and good looking. Like most psychopaths, he was charming and able to manipulate the people around him. What causes people to be psychopaths? Is it something missing in their genetic makeup or is it from the way that they are raised? Give me your thoughts, please."

sanjosemike replied, "In most cases they are male, but there are exceptions, like Aileen Wuornos. I think the females have less of a 'sexual satisfaction' component to their killings. Clearly there is a predator 'instinct.' There are no indications that Bundy was abused as a child, but many serial murderers were. I don't believe that they are 'sick' or demented, as others propose. I think they just enjoy being a predator, controlling and watching the suffering they cause. Yes, I am a doctor, but not a psychiatrist. I think that rules me out of any authority on this. Bundy was one type of murderer who engaged in sex with his dead victims, often many times, and long after their demise. I personally celebrated the night he was 'ended.' I fervently hope he suffered. Excuse me for being unprofessional."

DoubleW said, "Good post. One warning sign of possible sociopathy is a childhood obsession with tormenting or killing animals. Since sociopaths like Bundy tend to be clever at feigning normalcy, I don't know if anyone has ever tried rehabilitating one in childhood. It may be a disease caused by a brain lesion of some sort."

notation said, "Dahmer, if I recall correctly, had a morbid fascination with the carcasses of animals - he dissected them to see the organs inside. He later began actively killing animals. It seems as though he 'graduated' to killing humans when animals no longer satisfied his curiosity or his need."

A school camping trip to a Norway glacier turned deadly when a polar bear attacked the students' tents, killing a student and injuring four other people. The polar bear was killed. CNN.com readers were dismayed by the deaths but wondered why the campers had set up near polar bear territory and why the polar bear had been killed.

JustLookn33 said, "Start by saying that it is horrible that a young boy lost his life. It is absolutely tragic. But why kill the bear? The bear was in his habitat. As humans, we should respect the natural habitat of animals and not infringe on it. Just saying ..."

ekiekitapang replied, "As humans, we should get the facts before we volunteer our opinion. 1) It was killed in self defense, while rampaging. If they hadn't killed it, more kids would likely be dead. 2) There are huge expanses of territory on Svalbard; this area was one of the few where humans were often camping, while polar bears rarely visited. 3) So far, no indication they didn't follow rules, disrespected nature, infringed on any habitat, didn't use common sense or anything like that. The killed and maimed should get the benefit of the doubt. This can happen just by sheer bad luck."

houskin269 said, "If the scenario was that the bear left the forest and came to a man's home, and then the man killed the bear ... Do we ever kill the man? No, we say he was defending his family and territory and safety. Why can't animals with blood, heart, and brain be afforded the same rights to live?"

ekiekitapang replied, "Most people see humans as somewhat different to the other animals. That's why there is no Kentucky Fried Human and squirrels don't have the vote. In this instance, the bear would be treated in the same way if he was human. Had a human attacked the camp and started killing youths, the person with the gun would surely have shot him too if he had to."

AUColdSteel said, "According to other reports, it was one of the group members that killed it. In that regard, nature won out. There's not a single idiot here who is minimizing what happened who wouldn't have shot the bear if they were there. It's tragic no matter how you slice it."

UserM1 said, "People, seriously, a kid's dead. Show a modicum of respect, for crying out loud. You never been out in the wilderness? Never done anything remotely risky? The bear was shot to prevent it killing more of the group. They weren't a hunting party or anything; this is just the way it went down."