A federal judge blocked the Trump administration from diverting millions of dollars in funding from a project at aâ€twitter.com/i/web/status/1â€¦r4

The US Navy has ordered all ships that have visited countries in the Pacific region to effectively self-quarantineâ€twitter.com/i/web/status/1â€¦3t

At least 29 Turkish soldiers were killed in Syria's Idlib province in an attack by Syrian regime forces, a Turkishâ€twitter.com/i/web/status/1â€¦Ce

Police have named the suspect and victims of Wednesday's deadly shooting at the Molson Coors complex in Milwaukeeâ€twitter.com/i/web/status/1â€¦95

A Health and Human Services whistleblower claims US workers did not have proper training or protective gear when thâ€twitter.com/i/web/status/1â€¦IC

RT @CNNBusiness: JUST IN: The Dow plunged more than 1,100 points and closed in the red as worries about the coronavirus mounted. It was theâ€¦

Catherine Pugh, the former Baltimore mayor whose tenure was cut short by a children's book deal scandal, is sentencâ€twitter.com/i/web/status/1â€¦6l 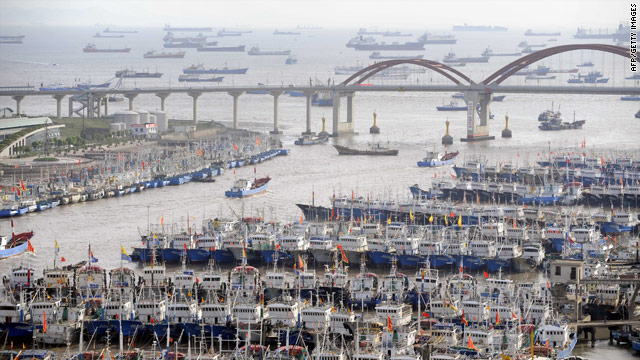 Chinese authorities are warning residents along the country's eastern coast to prepare for sustained torrential rains and strong winds as one of the strongest typhoons in recent years approaches.

Rainfall from Muifa will cover a million square kilometers (386,000 square miles) as the typhoon lingers for up to 11 days, Lou Maoyuan, deputy chief of the Zhejiang Provincial Meteorological Station, told Xinhua.

Waves from Muifa could reach 40 feet (12 meters) in the East China Sea and almost 15 feet (4.5 meters) along the coast near Shanghai and Zhejiang, forecasters told Xinhua. Authorities called more than 9,000 vessels back to harbors, the news agency reported.

Meanwhile, Muifa was raking the Japanese island of Okinawa on Friday, Stars and Stripes reported. Almost 18 inches of rain had fallen on the island in 24 hours, and wind gusts of almost 100 mph were recorded at the U.S. Air Force's Kadena Air Base.

Japanese broadcaster NHK reported 30 injuries from the storm on Okinawa.

Asia Pacific markets are falling as fears about the novel coronavirus continue to spur a global sell-off cnn.it/2TfBZXe
cnni

8:18 pm ET February 27, 2020 RETWEET
With new cases of novel coronavirus reported daily in countries across the globe, many travelers are wondering if tâ€twitter.com/i/web/status/1â€¦L2
cnni

7:31 pm ET February 27, 2020 RETWEET
The US Navy has ordered all ships that have visited countries in the Pacific region to effectively self-quarantineâ€twitter.com/i/web/status/1â€¦y0
cnni

7:11 pm ET February 27, 2020 RETWEET
Scientists have discovered for the first time that there are two distinct species of red panda, not just one -- andâ€twitter.com/i/web/status/1â€¦z1
cnni