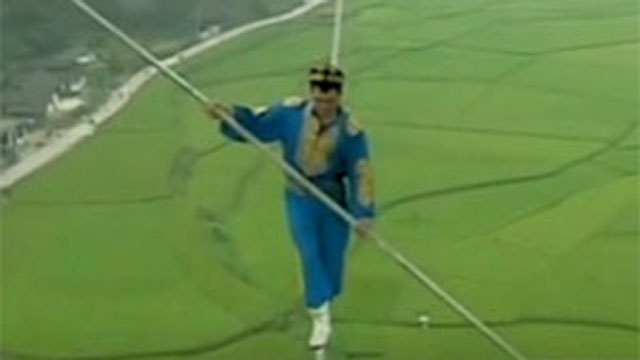 It’s a thin line between life and death in these daring stunts. Maybe it’s the adrenaline that motivates these daredevils, or perhaps it’s just a goal they must conquer.  A Chinese man was the latest to join the high-flying league on Saturday. You’ve gotta watch these stuntmen teeter sky high on their tiny tightropes across buildings, hot air balloons and the twin towers.

A daring legacy – Nik Wallenda attempts a stunt that killed his great-grandfather in 1978 by trying to walk a tightrope between two Puerto Rican hotel towers. High-wire walking may be in his blood, as his heritage includes generations of daredevils.
[cnn-video url="http://www.cnn.com/video/#/video/us/2011/06/04/nik.wallenda.highwire.cnn"%5D

Teetering between the twin towers – It was his mission and obsession. After other high-profile stunts, Philippe Petit had his sights set on walking a wire between the World Trade Center Towers. He and his team had to sneak wire into the towers to set up for the stunt.
[cnn-video url="http://www.cnn.com/video/#/video/showbiz/2008/08/07/anderson.man.on.wire.cnn"%5D