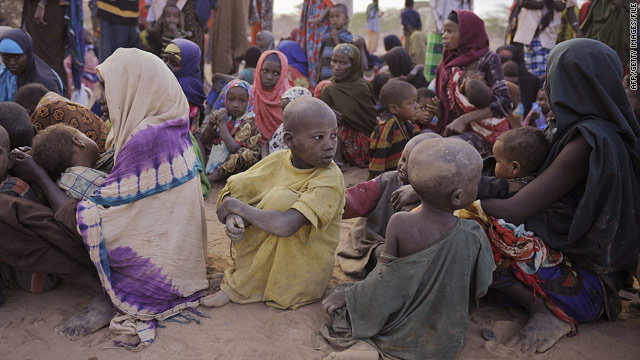 To help illuminate the problems facing the overcrowded Dadaab camp, the world's largest refugee complex, Oxfam last month provided a tour of the camp and interviewed people seeking refuge there. The situation has only worsened since then, and the United Nations said reports of children dying en route to the camp are "disturbingly common." The agency further said that almost half the children arriving from southern Somalia are malnourished.

Efforts to supply aid to Somalia have been vexed of late by al-Shabaab, an al Qaeda-linked group that controls much of south and central Somalia and had previously controlled a large chunk of the capital, Mogadishu. The United Nations recently reported that the group, which has called the famine an invention of the West, made up to $100 million a year off extortion, illegal taxation and other fees. Included were taxes on humanitarian aid going into Mogadishu.

Two developments of late may provide some hope for the Horn of Africa's hungry: The United States has relaxed rules that would provide for prosecution of any group providing aid that fell into al-Shabaab's hands, just days before the militants said they were retreating from Mogadishu after heavy fighting with government and African Union troops. Al-Shabaab said the withdrawal was merely a "change in tactics."

The U.N. High Commissioner for Refugees airlifted aid into the capital for the first time in five years Monday. The flight carried 34 tons of aid, including improvised tent sheets, sleeping mats, blankets, water containers and food utensils. Another similar flight is slated for Thursday, and a third planned flight will deliver high-energy biscuits, the refugee agency said.

"It's kind of a tale of two seasons," says @AllisonChinchar on this weekend's weather. "You have some areas of theâ€twitter.com/i/web/status/1â€¦u6
CNNweather

9:24 am ET September 25, 2021 RETWEET
The climate emergency is killing the countryside that inspired Sleeping Beauty. It's not the only crisis facing Gâ€twitter.com/i/web/status/1â€¦uf
cnni

8:03 am ET September 25, 2021 RETWEET
The climate emergency is creeping up on the countryside that inspired Sleeping Beauty. It's not the only crisis facâ€twitter.com/i/web/status/1â€¦oL
cnni

8:01 am ET September 25, 2021 RETWEET
50 years of armed conflict left Colombia with one of the highest internal-displaced populations in the world. CNN Hâ€twitter.com/i/web/status/1â€¦tx
cnni