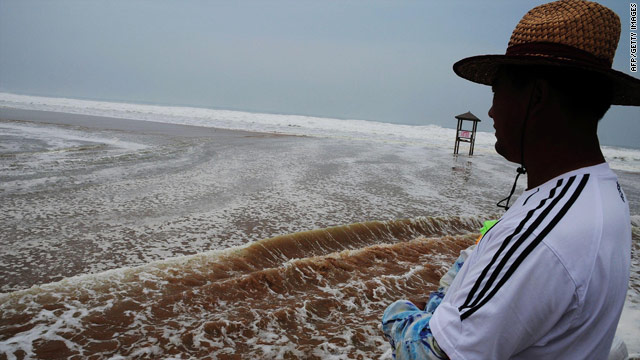 Waves threaten plant: Workers in China were repairing a dike damaged by huge waves from Tropical Storm Muifa in an effort to protect a petrochemical plant, the Xinhua News Agency reported.

Waves as high as 65 feet (20 meters) broke through the dike in Dailan, Xinhua reported, citing military personnel working on the repair. Officials fear a toxic spill could occur if sea water reaches the plant.

Dangerous heat: Most of Oklahoma and parts of Kansas, Texas, Arkansas, Tennessee and Mississippi are under excessive heat warnings Monday as the heat indices in those areas could reach 110 degrees.

Some areas may get limited relief from thunderstorms, forecasters said, but they also warned the dangerous heat may not break until midweek for other areas.

LeBron's bikeathon: Miami Heat star LeBron James is headed back to his hometown of Akron, Ohio, on Monday, this time to lead a 2.6-mile bike ride through the city‚Äôs streets as part of his ‚ÄúWheels for Education‚Äù initiative.

James and 20 high school students will pedal from the University of Akron to East High School where hundreds of students in the program will await them.

The bike ride will be the first event since the program underwent a name change from the King for Kids Bike-A-Thon. The initiative strives to improve the academic success of third-graders from single-parent households.

‚ÄúWe felt it was time to change the Bikeathon to something that could be more educational at the same time,‚Äù James told the Akron Beacon Journal. ‚ÄúWe feel great about it.‚Äù

A 16th-century copy of Leonardo da Vinci's "Salvator Mundi," the world's most expensive painting, has been recovere‚Ätwitter.com/i/web/status/1‚Ä¶ao
cnni

4:15 am ET January 19, 2021 RETWEET
New Covid-19 cases in the United States have been trending down since hitting a peak last week, but experts say it'‚Ätwitter.com/i/web/status/1‚Ä¶Jr
cnni

4:00 am ET January 19, 2021 RETWEET
Singapore's national carrier is hoping to become the world's first airline to get all of its crew members vaccinate‚Ätwitter.com/i/web/status/1‚Ä¶6D
cnni

3:44 am ET January 19, 2021 RETWEET
While a lot of attention has been paid to President Donald Trump's words, there's been less focus on the fiery rhet‚Ätwitter.com/i/web/status/1‚Ä¶wN
cnni