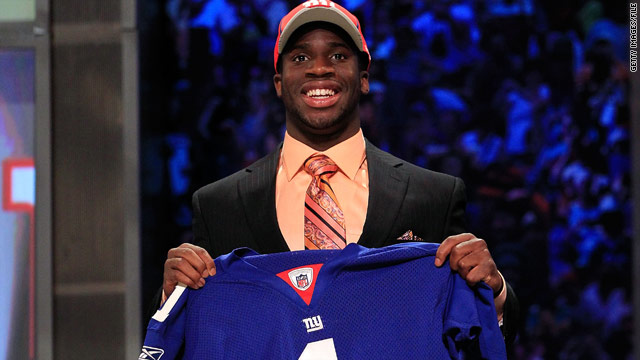 Injuries and contract bickering threaten the New York Giants season, SI.com's Matt Gagne writes. With the Eagles stacked squad poised to make an impact in the NFC East, the Giants sit in a somewhat precarious position. First-round draft pick Prince Amukamara's broken left foot has sidelined him for the foreseeable future while an ongoing contract dispute with Pro Bowl defensive end Osi Umenyiora both threaten to tamper with the start of the Giants' season. However, a favorable first-half schedule could work to their advantage - at least until the postseason:

"The first half is favorable, as six of the Giants' first seven opponents finished no better than two games under .500 last season," Gagne writes. "The lone exception is a Week 3 trip to Philadelphia, where Big Blue will try to snap a six-game losing streak against the reloaded Eagles. Soon enough, they'll truly have their work cut out for them.

"The final nine weeks include road games against the Patriots, Saints, Cowboys and Jets (though there's no traveling for that last one, to be played at New Meadowlands Stadium on Christmas Eve). They'll also face the Eagles and Cowboys again, this time at home, and host the defending Super Bowl champion Packers. The Giants faded down the stretch and missed the playoffs the past two seasons, even after posting 10 wins last year. It's a realistic number to see in the win column, but once again, it may not be enough to put the Giants in the postseason."

Up tonight:
Boston Red Sox vs. Minnesota Twins (7:10 p.m., ET) - Kicking off a three-day road series against the Twins tonight, the Red Sox will look to continue the momentum from a dominant performance against the Yankees. The team took two of three games in that series.

$8.1 million - Amount of Prince Amukamara's four-year contract with the New York Giants. The No. 19 draft pick broke his left foot and is expected to be sidelined for up to two months.

2 - Number of wins Sprint Cup driver Brad Keselowski has under his belt after taking the checkers at Pocono. SI.com's Brant James runs through five things he learned at Sunday's race.

145 - Number of wins ex-Tiger Woods caddie Steve Williams has been a part of. He caddied for Bridgestone Invitations winner Adam Scott Sunday.

With 100 days to go until the Games, already postponed a year due to the coronavirus pandemic, questions remain oveâ€twitter.com/i/web/status/1â€¦rl
cnni

11:45 am ET April 14, 2021 RETWEET
"That's the last time I heard from my son. And I've had no explanation since then." Daunte Wright called his motheâ€twitter.com/i/web/status/1â€¦4j
cnni

11:32 am ET April 14, 2021 RETWEET
One of France's biggest export industries is facing a devastating blow after an unusually severe frost earlier thisâ€twitter.com/i/web/status/1â€¦ll
cnni