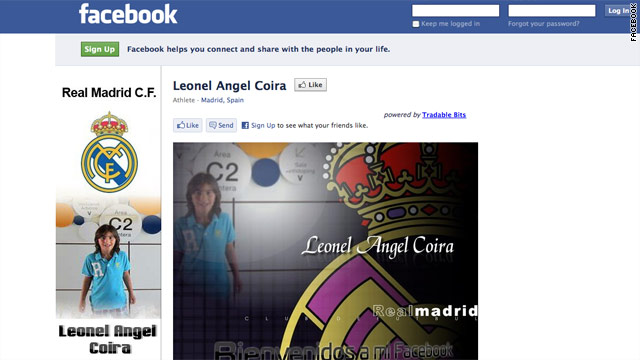 Spanish soccer powerhouse Real Madrid has made what is sure to be one of the most talked-about moves of the off-season, signing a 7-year-old Argentine to its youth system, according to an Argentine sports website.

The Spanish-language Ole ran an interview with Leonel Angel Coira in which the youngster said he had signed a contract to play in the Galacticos' youngest division.

Real Madrid had no word of the signing on its website, but goal.com reported that club spokesman Juan Tapiador confirmed the news Monday.

According to goal.com, Real Madrid snapped up the youngster to ward off attempts by other European clubs in the future - namely rival Atletico Madrid, which Ole said had already expressed interest in Coira.

Coira told Ole last week that he preferred making assists over scoring goals, that he can juggle a ball eight or nine times without dropping it and that his dream is to play for Real Madrid's first team, which is home to some of the world's greatest players, including Kaka and Cristiano Ronaldo.

His training with the under-9 players - or Benjamins, as they're known - begins September 6, he added. The team's Benjamin A squad is composed of 10-year-olds and one 11-year-old.

In a statement that might not sit so well with the Galacticos' faithful, Coira said his favorite player was fellow Argentine Lionel Messi, who plays for F.C. Barcelona. Real and Barcelona face each other twice a year in Spain's top league in a game known as "El Clasico."

The first comments began arriving on Coira's Facebook page after noon ET Monday and had already digressed into a war of words between Real and Barca fans. There were also notes of congratulations. As of 3:15 p.m. ET, his YouTube page - which was launched Monday and hosted a lone video - had three comments.

There are mutterings of disgust that Real has signed a player too young for many amusement park rides, but signing young players is old hat in the beautiful game. Earlier this year, VVV Venlo of the Netherlands' top league reportedly signed an 18-month-old to a 10-year-contract. Yes, an 18-month-old.

If you want to see the toddler, Baerke van der Meij, use his toy box for target practice, you can check it out on YouTube.