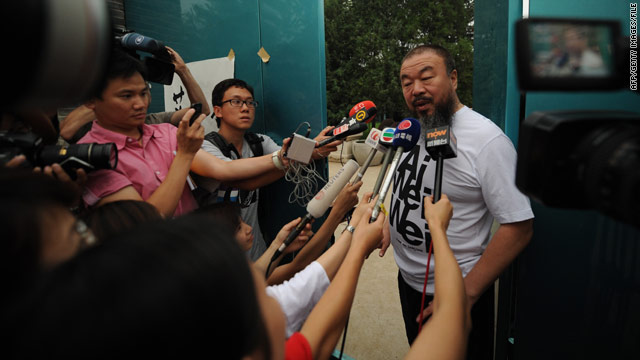 Ai Weiwei is back, and he's not taking any prisoners.

His Twitter missives, however, which began Monday night after a lengthy hiatus, may land the controversial contemporary artist back in a Chinese prison. In one tweet, he directly accused the government of illegally detaining innocent people who had connections to him.

Ai, who was released from prison in June after a three-month stint on tax evasion charges that some observers alleged were trumped up, had been instructed by the government to keep a low profile and to rein in his social-media activity. He had obliged until this week.

An outspoken critic of China's human rights record, Ai had loudly accused the government of trying to silence dissidents before his April detention. His Twitter account went silent shortly thereafter, and his mother told CNN no one heard from him for 43 days.

When he was released, he seemed subdued, telling a Radio Free Asia reporter outside his Beijing home, "I can't talk about anything."

But Sunday, he began tweeting again. At first, the tweets were innocuous: "Lunch 10 dumplings, regained 3 kilograms body weight." Another said, "Five cloves of garlic." He then linked out to pictures. One showed feet on a scale reading 214 pounds, and the next showed Ai from the nose up, alongside an unidentified male, both of them peering into the camera.

The playful tweets ended Monday night when he wrote, "Today I met Liu Zhenggang. He talked about the detention for the first time. ... This steel-willed man had tears coming down. ... He had a sudden heart attack at the detention center and almost died," according to The Guardian.

Later, he tweeted, "Because of the connection with me, they were illegally detained. Liu Zhenggang, Hu Mingfen, Wen Tao and Zhang Jinsong innocently suffered immense mental devastation and physical torment."

According to the BBC, the first four people Ai mentioned are friends, Ruan is a prominent Chengdu writer who has been jailed since February and could face charges of subversion, and Wang is a human rights activist who has been held since March as he awaits trial on a charge of creating a public disturbance.

Approached by The Guardian, an angry Ai said he was not allowed to give interviews, though he confirmed he had authored the tweets and shared a few thoughts.

"It was the first time after my release that I had met my colleague," he told the British newspaper, referring to Liu. "I was so shocked when I saw him. ... He (had) a heart attack and his body was still not moving well. They treated him terribly and he almost died during his inhumane detention."

He added, "So many people were related to my case and were inhumanely treated for so long. How could society and the system do this kind of thing and use the name of justice?"

Asked if he was concerned his tweets could land him in more trouble, he replied: "I am worried about everything. What am I going to do?" The Guardian reported.

Shortly before Ai's arrest in April, The Telegraph reported that Chinese authorities appeared rattled by talks of "jasmine" protests in the country. Despite Ai's call to boycott the Beijing Olympics because they were being used, he said, as propaganda, China had granted him a measure of protection until last year.

The government recently appeared to grow impatient with his criticism and activism, the paper reported. After it was announced that the government planned to raze his Shanghai studio, Ai was placed under house arrest in November when he planned a party to "observe" the government order. He said the plan to demolish his studio was a product of his activities.

"So what is my activity? My activity is very simple: asking basic rights for people to freely express themselves and also to find a new structure, a new way of communicating. Because I'm an artist, and this is what I do and I believe in that."

On April 3, he and an assistant were detained at the Beijing airport while awaiting a flight to Hong Kong. Police cordoned off his Beijing studio, and an assistant told CNN that eight employees there had been called in for questioning.

An editorial a few days later in the Communist party's Global Times newspaper blasted Ai, calling him an activist and maverick with a predilection for "surprising speech" and "surprising behavior." It also blasted the West for defending Ai and ignoring China's judicial sovereignty.

"Ai Weiwei will be judged by history, but he will pay a price for his special choice, which is the same in any society. China as a whole is progressing and no one has power to make a nation try to adapt to his personal likes and dislikes, which is different from whether rights of the minority are respected," the editorial said.

There was no mention of what charges Ai faced, and it did not directly say he was in custody. Rather, it reported that Ai "was said to have been detained recently."

Ai was released June 22, and Beijing police told the state-run Xinhua news agency that he had confessed to his crimes. It also stated that his good attitude and health conditions - he has diabetes and hypertension - were considerations.

The police also reiterated an earlier allegation that Ai was arrested because his company, Beijing Fake Cultural Development Ltd., failed to pay almost $800,000 in taxes and a $1 million fine and destroyed accounting documents. The Chinese government has steadfastly denied that Ai's activism has anything to do with his incarceration.

"The decision (to release Ai) comes also in consideration of the fact that Ai has repeatedly said he is willing to pay the taxes he evaded," Xinhua reported, citing police.

Jerome Cohen, adjunct senior fellow for Asia studies at the Council on Foreign Relations, told CNN after Ai's release that the artist had temporarily "lost his freedom of speech" and that the Chinese government would keep close tabs on him.

"He will not soon again be on Twitter, Facebook, television, take part in fora, etc. He's got to keep quiet and behave, according to the criteria of the Chinese police for the foreseeable future," Cohen said.

6:30 pm ET August 7, 2022 RETWEET
Israel and Islamic Jihad agree to a ceasefire after a weekend of conflict leaves more than 40 Gazan civilians and mŌĆtwitter.com/i/web/status/1ŌĆ”4y
cnni