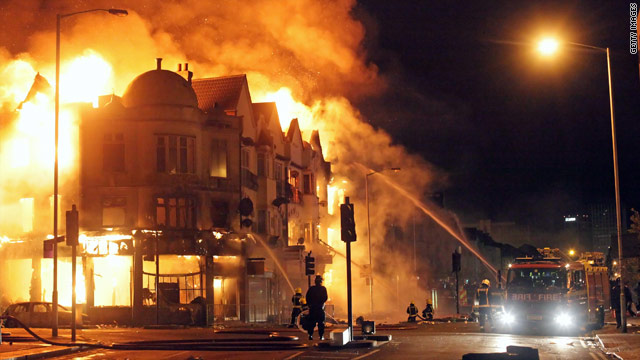 Graciela Watson watched aghast from her home in Hackney on Monday as "yobs" barricaded her normally quiet residential street with burning trash cans and clashed repeatedly with police.

She had witnessed tension building as she made her way home in the afternoon, having to take a different route than usual with her two children - both under three - to avoid crowds of people throwing missiles.

"We didn't think it would come up our street, but it started here," she said. Troublemaking youths, or yobs, gathered trash bins from outside the houses on the street and set them alight to form flaming barricades, she said.

"That's when we realized trouble was coming our way," Watson, a filmmaker and former journalist said.

The youths then set fire to a van and soon the clashes with police began in earnest, carrying on in her street for well over an hour.

Meanwhile, asleep at the back of the ground floor apartment were Watson's two young children, both under three - and there was no way for the family to leave the apartment except by the front door.

"It was kind of strange," Watson said. "You are scared but there's also a very strange kind of adrenaline almost, as you watch everything unfold in front of you.

"Watching on the TV, hearing your street being named, seeing your neighborhood in flames around you - you are terrified but almost excited at the same time."