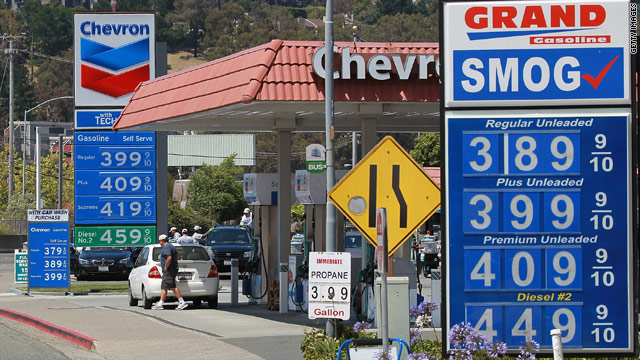 Gas prices: Will steep losses in the world's stock markets bring relief at the gas pump?

Oil prices have fallen more than 17% in the past month, finishing the day Monday at $83.10 a barrel, CNNMoney reports. That's down from almost $100 a barrel just two weeks ago. And at that time prices were expected to rise this year.

The government will issue its monthly price outlook Tuesday. Whether oil prices go up again may depend on whether market forecasters see a weakening of global economic demand after the stock market sell-offs.

Meanwhile, the national average gas price fell about a penny a gallon overnight to $3.65 a gallon, according to AAA's Daily Fuel Gauge Report. The average was $3.70 a week ago.

Heat warnings: The National Weather Service said Tuesday it has dropped excessive heat warnings for most of the U.S.

Eastern Oklahoma and southeastern Louisiana must endure excessive heat watches or warnings for at least another day, forecasters said, while heat advisories are in effect in parts of the Southern Plains and the Southeast.

The polygamist sect leader was convicted last week on two counts of sexual assault on a child.

The prosecution and the defense will have 30 minutes to offer their statements Tuesday. Deliberations are expected to begin immediately thereafter.

A recent "fireball" was spotted from all over eastern Texas and neighboring states. A fireball is a meteor that isâ€twitter.com/i/web/status/1â€¦PA
cnni

1:01 am ET August 3, 2021 RETWEET
For the first time, scientists have detected light from behind a black hole, and it fulfills a prediction rooted inâ€twitter.com/i/web/status/1â€¦YG
cnni