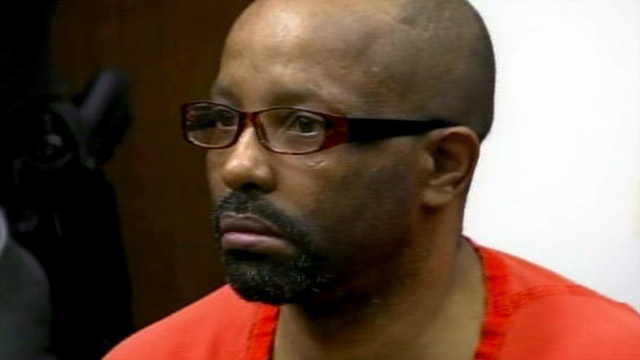 Relatives of the victims gasped and hugged each other as Judge Dick Ambrose announced the first verdict for victim Tonya Carmichael. The courtroom erupted into applause after Sowell, dressed in an orange jumpsuit, left the courtroom.

The final decision rests with Ambrose, who scheduled a hearing Friday to impose the sentence.

Sowell, who frowned as the verdicts were read, was convicted in July of 11 counts of aggravated murder more than 70 other charges, including abusing corpses and kidnapping.

As part of the sentencing hearing, Sowell made a statement on Monday without being under oath or facing cross-examination from prosecutors.

Sowell was visibly agitated and occasionally tearful as he recounted claims of childhood abuse - both physical and sexual.

Sowell said his childhood "was like a war," with his mother and grandmother constantly arguing, yelling and "whopping" the children.

He did not elaborate on the crimes for which he was convicted.

Sowell's convictions ended a saga that began in October 2009 with the discovery of the first two victims' remains inside Sowell's home. He eventually was accused of killing at least 11 women ranging in age from 25 to 52.

A German woman who joined ISIS has been sentenced to 10 years in prison over the death of a 5-year-old Yazidi girl cnn.it/3BeunZf
cnni

8:37 pm ET October 25, 2021 RETWEET
Facebook reported $29 billion in revenue for the three months ended in September, up 35% from the same period a yeaâ€twitter.com/i/web/status/1â€¦i8
cnni