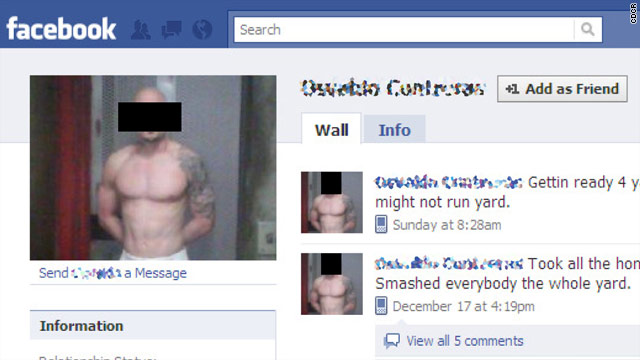 This inmate has been active on Facebook while in prison, the California Department of Corrections and Rehabilitation says.
August 10th, 2011
11:37 AM ET

Inmates on Facebook? Active profiles of California prisoners getting yanked

The state of California and Facebook are working together to help keep prisoners off Facebook for the safety of crime victims and to stop inmates from engaging in additional criminal activity, according to the California Department of Corrections and Rehabilitation.

Facebook has agreed to yank profiles that are updated while users are in prison, though those created before the prisoners were locked up can stay online.

The decision to step up efforts to remove profiles set up on behalf of inmates, or to keep prisoners from using the site on illegal cell phones, intends to try and curb inmates' ability to keep committing crimes and protect those who helped put them there, according to the department.

“Access to social media allows inmates to circumvent our monitoring process and continue to engage in criminal activity,” California Department of Corrections and Rehabilitation Secretary Matthew Cate said in a statement. “This new cooperation between law enforcement and Facebook will help protect the community and potentially avoid future victims.”

The corrections department cited the case of a mother who received mail from a convicted sex offender with drawings and sketches of her 17-year-old daughter, the offender's victim. The prisoner, according to the department, had used an illegal cell phone to go on MySpace and Facebook to see current photos of the teen. Using those photos, he reportedly made the drawings with precise detail, including her hairstyle and clothes.

The increased use of contraband has compounded the problem, the department said, especially that of illegal cell phones. It said that in 2006, 261 phones were confiscated inside state prisons, compared with 7,284 in the first six months of 2011 alone.