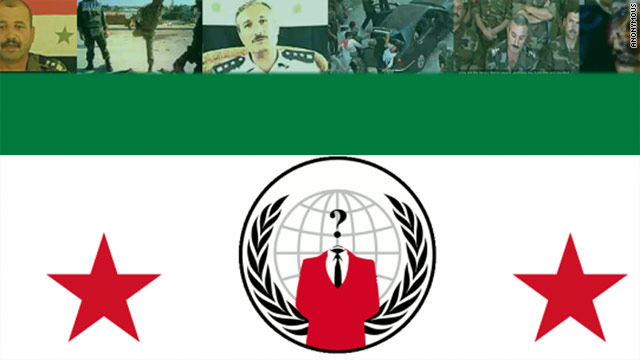 Facebook users have been warned. The hacking group Anonymous says it will attack on November 5.
August 10th, 2011
04:46 PM ET

“They can have my FB info...I'm not important enough for it to do any harm. Lots of pictures of me drunk though...have at those!” - pakman1412

Members of Anonymous, the group that took credit for hacking Syria's defense site Monday, say Facebook will be next. The shadowy collective known for its politically motivated Web hacks and attacks take issue with Facebook’s misuse of personal information. They released a video statement (using a voice modulator) announcing the date of their attack: November 5, 2011 “a day that will go down in history.”

Despite the ominous tone of their warning, CNN.com readers weren’t fazed. In fact, many said they support their efforts.

PublicAnimal said, “I hope they succeed. Facebook is a cancer.”

swordspider responded, “Only hacking the mentality of the user will work, and unfortunately our society is so far lost from the concept of creating whole, genuine relationships over instantaneous clicks of virtual friendship that to cut off the soulless vessel that is Facebook will only spawn two more.”

BioHzrd420 responded, “Sounds like somebody doesn't have any ‘Friends.’”

Tankles responded, “Is it a cancer because I use it to keep in touch with friends I haven't seen since high school? Is it societal degradation because I can instantly find out where my college friends are living, scattered across the country? Not saying playing Farmville for 19 hours a day is healthy, but I hope you don't make inane generalizing comments about things, just because you don't have a high personal opinion of it.”

neuwest1 said, “Really? Facebook? Don't you guys have anything truly WORTHY of hacking? How about hacking Al Qaeda’s terrorist funds and routing them into failing school districts? Don't be so short-sighted. Take down Facebook and you have a bunch of mad grandmas who can't see photos of their grandkids. Take money away from Al Qaeda and put it toward schools... ha, ha even Salman Rushdie couldn't beat that! And you'd even get a deathmark on your heads! Woo hoo!”

laocman said, “Hacking bank accounts would take skill. These are a bunch of kids with DDoS bots. All they can do is take websites down temporarily.”

Bubba01 responded, “These are high school kids. Facebook is the biggest and coolest thing they can imagine.”

JoeISP said, “The way to take down Facebook is simple...don't use it.”

ifaponurmom said, “Though I do not agree with what Anonymous is planning, it will provide me endless amusement if they succeed. Just imagine all those people you know who spend hours a day on Facebook (the ones who's lives revolve around it) pulling their hair out in aguish because they long ago forgot how to interact with the world around them. I doubt Anonymous can pull it off, but if they do, I'll be sure to carry a videocamera that day to record all those people forced to live in the world around them once more.”

ZooLife2 responded, “You do realize that Anonymous members are pretty much in the ‘spending hours a day’ on a computer club, right? If anything their activities are far less social than those that use FB. Also illegal.”

amembername said, “Anon's ex obviously changed her relationship status and then blocked him.” JustinCase4u said, “LOL! They don’t have girlfriends. They are skinny little white teens in a basement full of equipment.”

GodLover11 said, “I got a feeling Anonymous is Google+...”

Does ‘The Help’ go beyond stereotypes?

‘The Help,’ a movie based on the best-selling book, is about a white woman in the 1960s who helps tell the story of a group of black domestics in Mississippi. The movie hits theaters today and with it, likely, some dialogue about the depiction of blacks in movies—and past and present race relations.

CNN.com readers are already diving in:

Sunflower2 said, “I read this book and never laughed so hard in all my life. I had tears streaming down my face. The women were tough, gritty, hilarious and never seemed to have a sense of total helplessness. They were smart and very capable. I was struck by their courage. This book was a snapshot of life in the south. Wanting it not to be so, and pretending it didn't happen, doesn't make it less of a reality. The perseverance of these women is what needs to be noted and remembered...It was an awesome book. I know where I'll be this weekend!”

yellowcat1 said, “I grew up during this time in Birmingham, Alabama. I found this book to be so real and true to what I saw. Everything from the Ole Miss football crap to treating blacks as if they were subhuman. Some white Southerners just don't want to admit how bad it was. But there were good people too, like Skeeter, and some blacks don't want to admit that either. To stick your neck out in the Jim Crowe south would have been pure hell for anyone and require a great deal of bravery.”

thetypist said, “My mother is a maid to a very wealthy white family, although they have been very helpful towards my mother in some ways. You have to understand that my mother raised their kids instead of her own. They required her to spend holidays with them and go out of town to different states where they have homes; it was like she didn't have family of her own. My mother was a single parent and she felt that she had to make a living for us but the loss was her own children. We need her time more than the money. That is something I have learned raising my children with my husband.”

mstasik said, “I loved this book. The maids are brave, smart women with common sense and loving hearts who endured unspeakable humiliation. They are heroes. I cannot wait to see the film!”

cherrybaby said, “Stereotyping? No. It's a fairly accurate representation of what life was like in Jackson, Mississippi in the 1960's. The book is, anyway. Not sure about the movie.”

sroo said, “Isn't the ‘Different Strokes’ theme outdone at this point – rich white family saves poor black family. I'm over it. Is anybody else? Just once I'd like to see a story/book/movie about a rich black family 'save' a poor white family.”

JanetMermaid said, “Fiction or not, this is an important and worthwhile movie. I've read the book. Younger Americans need to know what it was like back then (and older ones need to be reminded).”

gizziesmom said, “I am a black person and I read the book. It was a good read. After reading these comments, it is abundantly clear that there is, and always will be, ignorance when it comes to race relations.”

Martin: No bias in Newsweek cover

Syndicated columnist and author of "The First: President Barack Obama's Road to the White House,” Roland Martin says the Newsweek cover of Michele Bachmann is not sexist or biased. He also says conservatives have more important things to be mad about, including a stalled economy.

lauradet said, “I like the photo. It shows a true depiction of a woman who has lost her marbles and is off her rocker. She is a Birther, a liar and she uses federal funds to pay for her farm and a humongous home on the golf course; oh and she likes to pray the ‘gay’ away. I wonder how much of a tax kick back she receives for all her foster kids...I bet it's over $50,000.”

Alexio responded, “It's better to see her on this cover for a few days, than in the office for four years. Good job! And BTW, I vote republican, but don't vote a nut case.

But oddjob3422 said, “Only someone that really, really hates another person personally would rail about them caring for foster children, and imply that they do so in order to evade taxes.”

poozybear said, “So the Tea Party is up in arms over what amounts to a mildly unflattering photo of Bachmann, but just fine with waving signs that depict Obama as Hitler or an African witch doctor. Can't have it both way folks.”

Aether417 responded, “They don't want it both ways. They want it their way. Think of the debt ceiling debacle.”

joemcdaniels responded, “Who's fine with it? I suggest you and many others here find out what the Tea Party really stands for instead of focusing on a couple crazies.”

Bubba01 responded, “Joe, we have tea crazies in my town, with the Obama/Joker signs and the guns and the shouts of ‘Kill Democrats.’ I think I can tell what they stand for, thanks.”

Alix56 said, “She's not a feminist. Plus, she actually looks like that.”

toofly said, “Like Jon Stewart said on the Daily Show last night. Don't criticize the woman based on her appearance, do it on all the words that come out of her mouth.”

sirrloin85 said, “I'm conservative and hate this woman with a passion, most conservatives hate her. Keep religion out of politics!”

But sentry21 said, “No surprise a Liberal like Roland dismisses the Newsweek photo. Michelle is fairly even-tempered; it’s always a double-standard with the Main Stream Media.”

10:00 am ET December 5, 2022 RETWEET
A new trailer for their Netflix docuseries “Harry & Meghan” was released Monday, along with a streaming scheducnn.it/3uocUMLzEGt
cnni