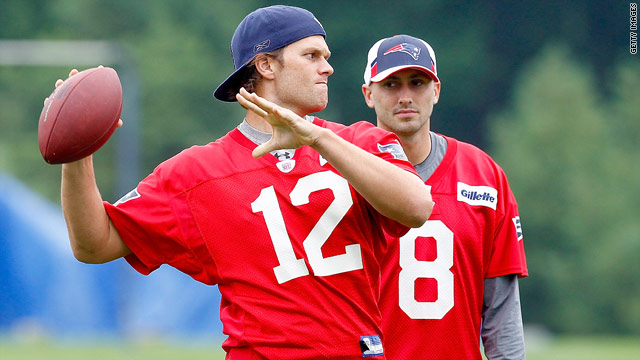 NFL preseason: Are you ready for some football? Earlier this summer, with the NFL owners and players in a labor dispute, there was worry we'd be waiting for college games to begin to answer that question.

But with the league's labor agreement July 25, training camps were able to begin and tonight we get the NFL's first preseason games. The Jaguars are at the Patriots; the Ravens visit the Eagles; the Seahawks travel to the Chargers in an ESPN game; the Broncos are at the Cowboys; and the Cardinals visit the Raiders.

Ten more teams will kick off their preseason schedule Friday.

Even as games begin, SI.com reports that because of the late labor deal, there's still a decent crop of free-agent players looking for a home.

PGA golf: The last of golf's four major tournaments for 2011, the PGA Championship, tees off in suburban Atlanta on Thursday, with the focus on two players, Tiger Woods and Rory McIlroy, writes Golf magazine's Cameron Morfit.

"What will define this PGA is what defines every major, namely whether it will become a memorable step in one player's journey to world domination or a forgettable victory by a less-than-legendary golfer. That means this PGA Championship is all about Rory McIlroy and Tiger Woods until further notice," Morfit writes.

Woods, of course, is trying to get back into winning form after dominating the sport for more than a decade until marital problems and injuries took him away from the course.
McIlroy dominated the last major on American soil, the U.S. Open, in June, winning by eight strokes, but he faltered in the most recent major, the Open Championship in Britain, coming in 25th there last month.
"Star Trek" Convention: Trekkies from distant worlds, in a sense, will converge on Las Vegas beginning Thursday for the official Star Trek Convention, in celebration of the 45th anniversary of the space-themed franchise.

Special guests will include William Shatner, called in convention literature â€śone of the world's pop culture treasures,â€ť along with Leonard Nimoy and several actors from subsequent generations of the show and films.

The Ugandan High Court has lifted the house arrest of Bobi Wine after security forces surrounded the presidential câ€twitter.com/i/web/status/1â€¦hV
cnni

8:41 am ET January 25, 2021 RETWEET
A man who was missing for two and a half weeks in the Australian bush has been found alive after surviving on mushrâ€twitter.com/i/web/status/1â€¦Il
cnni

8:15 am ET January 25, 2021 RETWEET
Nine months. That's how long it took the world's top 1,000 billionaires to recoup their fortunes after the pandemicâ€twitter.com/i/web/status/1â€¦eP
cnni