[Updated at 9:02 p.m. ET] Tropical Storm Gert is gaining strength as it barrels toward the Atlantic island of Bermuda, the National Hurricane Center said Sunday.

The storm system was about 255 miles south-southeast of Bermuda and "slowly strengthening" as it heads north, according to a 5 p.m. advisory from the center, which is part of the National Weather Service.

Gert's eye is forecast to go near or just east of Bermuda on Monday afternoon, prompting a tropical storm warning for the island. No other islands are similarly threatened, and the storm is expected to eventually turn northeast back out over open sea.

Detectives in southern California searched Sunday for clues to crack the case of a stolen piece of artwork by Dutch master Rembrandt van Rijn, thought to be worth some $250,000.

The theft occurred when a curator was distracted by another person, who appeared interested in buying something, said Steve Whitmore, spokesman with the Los Angeles Sheriff's Department. 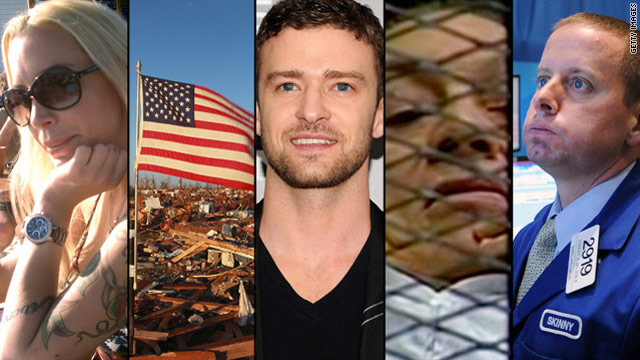 Will this week on Wall Street be anything like the roller coaster ride of the previous week? A number of important economic reports coming out this week will have a role in how things shake out.¬ÝHere is a look at this and other stories that CNN plans to follow:

Another turbulent week ahead for investors?

A number of factors - including concerns about debt in Europe, the U.S. economy and Standard & Poor's decision to downgrade the United States' credit rating - could make this another wild week on Wall Street, CNNMoney contributor Ken Sweet writes.

Stocks took big downward and upward swings last week - the Dow Jones Industrial Average dropped 635 points Monday, rose 420 the next day, fell 520 points on Wednesday and jumped 420 points on Thursday. When it all settled, the three major stock indexes ended the week down by an average of 1.5%.

END_OF_DOCUMENT_TOKEN_TO_BE_REPLACED

Members of a well-known hacking group - according to a statement and Twitter messages - took credit Sunday for an online attack targeting San Francisco's embattled transit system.

On Sunday afternoon, a link off BART's website to myBART.org apparently had been hacked. It showed a page featuring, among other items, the Anonymous logo - a smirking mask above two crossed swords, all on a black background.

The lawyer for a U.S. man being held in Aruba in connection with the case of a missing American woman urged authorities on Sunday to release his client.

This weekend, authorities said that crews searching for the missing woman have looked in Aruban phosphate mines. 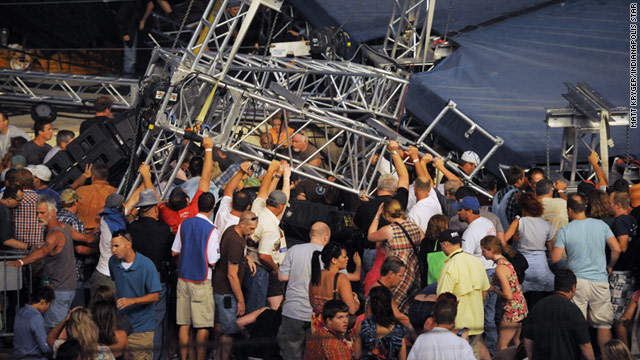 At least five people were killed Saturday night at the Indiana State Fair when a massive wind tore down a concert stage, authorities said.¬ÝIndiana Gov. Mitch Daniels described the collapse as a "freakish accident." Watch an iReport shot by someone who captured the stage collapsing.

Allison Hoehn¬Ýsaid¬Ýmany in the crowd¬Ýrushed to try to help people trapped under the debris.¬Ý "We tried to get down to help, but no one was moving," she said. "The storm came on so fast and the stage just snapped like a toothpick."

As crews sifted through the rubble late into¬ÝSaturday, on Sunday¬ÝIndiana State Police Sgt. Dave Bursten¬Ýreported that in addition to the fatalities,¬Ýat least 40 were injured.

"It's a very sad day at the state fair and our hearts are really breaking," said¬ÝCindy Hoye, the fair's executive director.¬Ý

The country music duo Sugarland, who was slated to appear on stage Saturday, tweeted that they were okay:¬Ý"We are all right. We are praying for our fans, and the people of Indianapolis. We hope you'll join us. They need your strength."

A pest control technician recently found a massive trove of acorns cleverly stashed in the walls of a California ho‚Ätwitter.com/i/web/status/1‚Ä¶Zk
cnni

A pest control technician recently found a massive trove of acorns cleverly stashed in the walls of a California ho‚Ätwitter.com/i/web/status/1‚Ä¶Zk
cnni

12:55 pm ET February 8, 2023 RETWEET
Authorities in Quebec said two children have died and six others were taken to area hospitals with injuries after a‚Ätwitter.com/i/web/status/1‚Ä¶On
cnnbrk

10:19 am ET February 8, 2023 RETWEET
Ukrainian President Zelensky is visiting the UK today for the first time since Russia's invasion of Ukraine, Downin‚Ätwitter.com/i/web/status/1‚Ä¶wz
cnnbrk