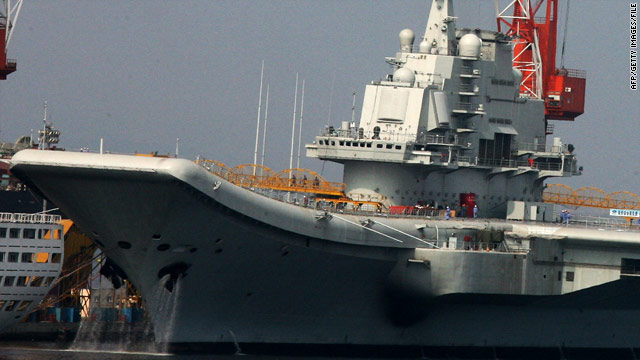 China's first aircraft carrier was back in port Monday after completing four days of sea trials.

Seven tugboats pulled the vessel, a platform China acquired from Ukraine, into the port of Dalian on Sunday morning. The carrier's radar was visible, but weapons systems were concealed under sheets, the Xinhua News Agency reported.

A Chinese military expert told the People's Daily Online that the radar system, called the "Chinese Aegis" in reference to its sophisticated U.S. Navy counterpart, is one of the most advanced deployed by any navy.

The Chinese military has not given details of what was tested during the trials, but China Central Television said engines, navigation and weapons systems, and fire-control and life-saving systems were likely to be checked.

People's Daily Online said that when completed, the carrier will be able to carry 30 J-15 fighter planes and will have a crew of 2,000.

The refitting of the carrier, which has yet to be named, will be continued in the Dalian port, Chinese media reported.

China bought the shell of the carrier, then called the Varyag, from Ukraine in 1998. Its construction was begun under the Soviet military before the breakup of the Soviet Union.

The carrier has become a tourist draw in Dalian, Xinhua reported, with citizens converging on the port to catch a glimpse.

2:16 pm ET May 21, 2022 RETWEET
Coke knows that its soda caps often end up as litter. So it's trying to solve the problem by tethering them to theâ€twitter.com/i/web/status/1â€¦kV
cnni

2:16 pm ET May 21, 2022 RETWEET
The US Forest Service is hitting a pause on prescribed fire operations in all the system's lands across the countryâ€twitter.com/i/web/status/1â€¦TL
CNNweather

Australian Labor Party leader Anthony Albanese will be the country's next Prime Minister, according to projectionsâ€twitter.com/i/web/status/1â€¦9C
cnnbrk