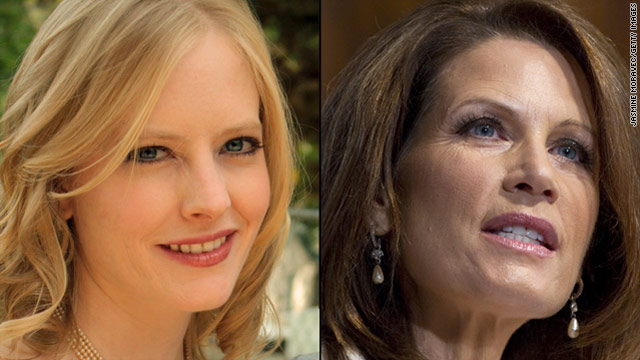 "Congratulations!!! you graduated from 'Christian' to follower of Christ's teachings. The two are nowhere near the same these days!"–Liz the First

"You so-called secular humanist 'Christians' are clearly self-proclaimed Christians in name only. You MAYBE warm a pew seat on Sunday but don't know your Bible from the NYT."–Carol

My Take: I could have become Michele Bachmann

From the way writer Alisa Harris describes it, she and Michele Bachmann┬Ācould have been sisters. Harris, author of the forthcoming book "Raised Right: How I Untangled My Faith From Politics," says they shared similar family upbringing and education. But unlike Bachmann, Harris says, she began to doubt what she had been taught. "I began to think that our Christian duty was not to make our countryŌĆÖs laws conform to our private morality but to heal the broken-hearted and bind up their wounds."

As with many Belief Blogs, CNN.com readers were divided over religion and its place in politics. Damian said, "Great article! Very interesting how you came around. Thank god! Too bad we can't say that for Bachman. Hopefully most of the U.S. will realize how extreme she is and that she isn't focused on the right things."

tallulah13 said, "I find it amazing that so many 'Christians' vilify this woman for turning away from her childhood indoctrination in an attempt to follow the teachings of Christ. It says a great deal about the state of Christianity in this country that so many are more interested in calling the author names than they are in considering the value of her words."

But KJB said, "It appears that what we have here is someone who has embraced the Progressive ideology, attempted to baptize it with the Old Testament prophets, and pretended to be a more faithful Christian than Michele Bachmann. Harris is a writer. Bachmann, by contrast, is a doer. She has fought against injustice in the tax code, labored for economic freedom and against corruption, and fostered dozens of children. Harris could have been Michele Bachmann? If only. ..."

CarrotCakeMan┬Āreplied, "Oh, really, Bachmann, a 'DOER'? No, the only thing she has done is shoot off her mouth. She hasn't gotten a single bill passed by Congress. When she was in the Minnesota Legislature, her record was similarly nonexistent."

Pastafarian┬Āsaid, "Please explain to me how a country founded on religious freedom by people fleeing religious oppression was founded on a Christian worldview? I live here, pay taxes, and want nothing to do with your twisted myths and fairy tales." jon asked, "Is there any way possible to get these religious people OUT OF POLITICS??"

Many CNN.com readers seemed more amused than angry. trankwill said, " 'The fighting Palefaces' has a certain ring to it." CaptnCrunch┬Āsaid, "Just a thought: How would you like it if the NFL team was the 'Washington BlackSkins'?"

But pintodw said, "The NCAA is a collective group of idiots. Just because a few Sioux Indians are overly sensitive doesn't mean the NCAA needs to play along with them. This is a perfect example of political correctness to the point of stupidity."

Guest said, "Seems like the name of the state - North Dakota - is also taken from a Native American tribe. Is the NCAA going to require that they rename the entire state also so as not to offend anyone?" QthePower said, "It's funny how a red state like North Dakota says government needs to stop telling people what to do, and then turns around and tells a school what to do."

ReadingLady said, "Incidentally, Sioux is a racial slur imposed upon a proud people by French trappers. It means 'dog people.' It was never meant to speak of a people with pride." HFC13 agreed, "I know the Lakota tribes of South Dakota, specifically, don't like it." But lieometer said, "Tribes in North Dakota and elsewhere refer to themselves as Sioux: Standing Rock Sioux Tribe, Spirit Lake Sioux Tribe."

road08┬Āsaid, "Other team names are just as politically incorrect. What about my Minnesota Vikings? We have a mascot who wears a helmet with horns, has a long unruly beard and blows a horn as a war chant. The Vikings were a warrior people who pillaged villages, drank heartily and had their way with women. Being half Scandinavian, I resent this depiction. I suggest something more enlightened like a blond-haired blue-eyed slight-built male with his hands extended in friendship. And don't get me started on the Celtics."

The package covers are repulsive: brownish, gnarly lungs; a chest scar like Frankenstein's; mouth lesions. But CNN contributor Bob Greene doesn't think the campaign to horrify smokers will work. He points out that while the percentage of smokers in the U.S. has dropped, their numbers - due to an increasing population - have not. And if cigarette packages that cost $18.30 don't deter smokers, he doubts that disgusting photos will.

The column had CNN.com readers sharing how hard it is to quit. pinksock019 asked, "Do smokers (those who do not care about quitting), think the medical evidence is wrong? I think most smokers I know would like to quit but find it too hard. But there are smokers with no intention of quitting."

B5556 replied, "I'm not a smoker but I think the answer to your question is that smokers do not believe every one of them will suffer any ill effects; certainly there are serious conditions related to smoking, but then every one of us probably knows the two-pack-a-day smoker who lived to well over 90 with no ill effects. My grandmother was one."

Red2012 said, "I've tried hundreds of times to quit. I can stop for one day, but then my mind decides it must have the cigarettes. I get dizzy and have an urge to go buy cigarettes. Patches don't help because they are putting nicotine in the system. If my health insurance would pay for me to be locked up in a padded room for about a month I might be able to shake the habit. I also happen to like smoking. It helps me to concentrate and gives me something to do."

Maventi said, "Dennis Leary was prophetic: 'You could make the entire package the warning, and call the product Tumors, and people would still line up to buy them.' "

magmay88 disagreed, "The labels and prices made me quit smoking." AndrewFriet said, "I'll tell ya, I quit smoking not so much because of the health effects but because of the cost. I knew for the 25 years of my smoking career what the health risks were, but when they were getting taxed like crazy I quit."

radiovision said, "I am not a smoker myself but I remember seeing smokers' lungs from cadavers as part of a high school anti-smoking campaign, and just thinking how gross they looked. It really had an effect on me, knowing that if I smoked my lungs would turn into what looked like charred steak."