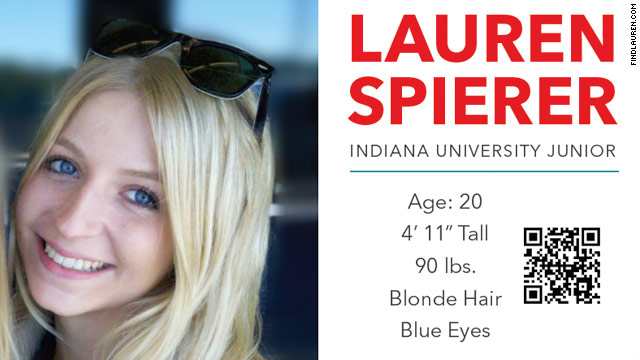 Indiana investigators and the FBI began combing through a western Indiana landfill Tuesday in search of fresh clues to the June disappearance of college student Lauren Spierer.

The Bloomington Police Department has isolated a roughly 170,000-cubic-foot patch of garbage at the landfill and may need two weeks to sort through it, the department said in a statement announcing the search. The site holds waste transported from Bloomington, including from bins intersection where the Indiana University student was last seen.

"While working with the company that operates the landfill, Republic Services, waste that was taken from the city on and around the dates of Spierer's disappearance was identified at the landfill site," police said. "That location within the landfill has remained isolated and secured since that time with no additional waste placed in the identified area."

The landfill is in Pimento, about 60 miles west of Bloomington and about 10 miles south of Terre Haute. In a statement issued through police, the Spierer family offered investigators their "sincere thanks and appreciation for their continued support in our efforts to find Lauren."

Spierer, a 20-year-old sophomore, disappeared early June 2 after leaving a Bloomington sports bar with a male acquaintance. Police said surveillance video from an alley showed them walking toward his building around 3 a.m. Spierer's keys were later found in that alley, but the petite blonde never made it home.

One of her companion's neighbors reported seeing Spierer leave around 4:30 a.m., but police said they found no sign of her after the 3 a.m. sighting on any of the surveillance video they viewed from the blocks between the two buildings.

In a statement posted on their website over the weekend, Spierer's parents expressed frustration at the "deafening silence" among her friends and acquaintances and pleaded for them to come forward with any information.

"There is no reason to think the people Lauren was last with wouldn't do everything in their power to help us find her," they wrote.

"The silence compounds our frustration, our desperation and our grief in not having found Lauren," they added. "It threatens to be our undoing, but make no mistake, we will never give up."