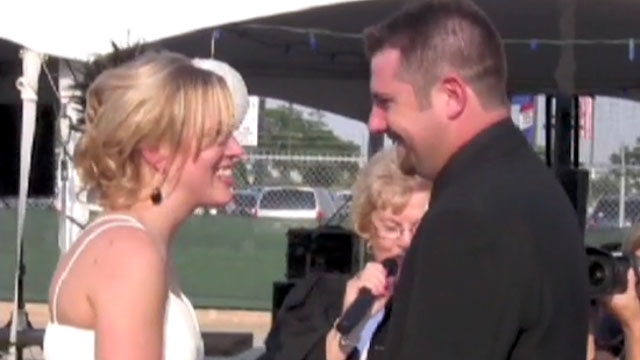 You've decided you want to marry that special someone, and now you're tasked with finding the most memorable and romantic way to pop the question. Everyone's already seen the countless sports venue proposals, and the restaurant thing is SO overdone. What's someone to do? You've gotta watch how these men make their marriage proposals unforgettable with their unique grand gestures.

Surprise! We're getting married – An unforeseen wedding proposal is one thing; showing up to your own surprise wedding is another. In the space of a few brief minutes, a woman gets a proposal and a wedding ceremony thanks to her beau.
[cnn-video url="http://www.cnn.com/video/#/video/world/2011/08/16/dnt.surprise.wedding.cbc"%5D

Coming to a theater near you: The proposal – – In a world where "surprise" proposals are as ubiquitous as the viral videos they inspire, this one takes the cake. Imagine going to a movie and watching a trailer only to discover your love is the star. What happens next is beyond movie magic.
[cnn-video url="http://www.cnn.com/video/#/video/bestoftv/2011/05/19/exp.sbt.marriage.proposal.mpg.hln"%5D

Attention shoppers: Wedding on aisle six – It seems familiar. People begin singing and dancing out of nowhere. But, this flash mob was different. It was an actual wedding ceremony. You’ve got to give some points for creativity, proving flash mobs aren’t just for random dance routines and crime sprees.
[cnn-video url="http://www.cnn.com/video/#/video/us/2011/01/07/flash.mob.wedding.whdh"%5D

Proposal gone wrong – Some things sound better in theory than they do in practice. One woman was upset when someone spray painted a marriage proposal on her garage door, particularly because she wasn't the intended recipient.
[cnn-video url="http://www.cnn.com/video/#/video/us/2011/05/06/dnt.spray.paint.proposal.wink"%5D