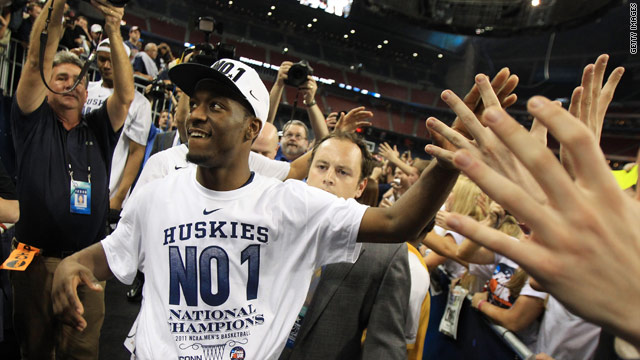 UConn;s Kemba Walker sports a No. 1 shirt after winning the NCAA championship, but under new rules his team wouldn't have made it to the dance.
August 17th, 2011
09:04 AM ET

NCAA's stricter academic rules: What does it mean for your team?

The NCAA is raising its academic requirements for postseason competition, including bowl games and March Madness, the organization announced Thursday in a news release.

Had the new rules been in effect during the 2010-11 academic year, the University of Connecticut would not have been able to compete in (and win) the NCAA basketball tournament. Syracuse and Florida State would have also been barred from the Big Dance, and the University of Southern California wouldn't have qualified for the "First Four" play-in game it lost to Virginia Commonwealth.

The NCAA calculates an academic progress rate that measures retention and graduation rates for every Division I team, reflecting the previous four academic years. The score comes out to a number as high as 1,000. Since its introduction in 2005, teams with APRs below 925 would face penalties, such as losing scholarships. Postseason bans would be issued only after three consecutive years of APRs below 900.

When the new rule is in full effect, only teams that have APRs of at least 930 will be able to compete in the postseason, according to a NCAA news release. The new rule will be gradually implemented over the next five years.  An APR of 930 comes out to a 50% graduation rate, according to the news release.

"The board voted to raise the  Academic Progress Rate benchmark from 900 to 930 and supported a penalty structure that will require teams to earn at least a 930 four-year, rolling APR in order to participate in postseason competition," the release said.

There was no mention in the announcement of teams being allowed to fall below this minimum for a certain number of years, as they have been in the past.

The idea for the new regulation came out of a conference between NCAA president Mark Emmert and 50 university presidents. After the conference ended last week, the Division I board of directors voted unanimously to approve the new rule.

Last year, UConn's APR for basketball was 893. Since it was not their third consecutive year below 900, the Huskies were able to compete in the NCAA tournament. If the new rules had been in effect, they would have been barred from the Big Dance. In fact, several teams would have been. The University of Texas – San Antonio would have been out, as would its play-in opponent Alabama State. No. 3 seed Syracuse may have lost to No. 11 Marquette because of a questionable call, but if the new academic benchmark had been in place, the Orange wouldn't have played at all. Florida State University, with an APR of 926, would have already fallen short before it could fall short of beating Virginia Commonwealth University in the Sweet 16.

The rule, had it been in effect, would have also changed the look of the football postseason. All of last year's conference champions were in the clear APR-wise, but other competitors in post-season bowl games would not have been.

Though Michigan came nowhere close to beating Mississippi State in the Gator Bowl, it would have just missed the APR cutoff, with a score of 928. Maryland beat East Carolina in the Military Bowl, but the Terps' APR of 922 would have kept them from playing at all. The New Mexico Bowl and the Beef 'O' Brady's Bowl would have had completely different makeups, as Brigham Young, University of Texas – El Paso, University of Louisville and Southern Mississippi all had APRs below 930.

The NCAA news release said a detailed timeline for implementing the new academic benchmarks will be ready in October.