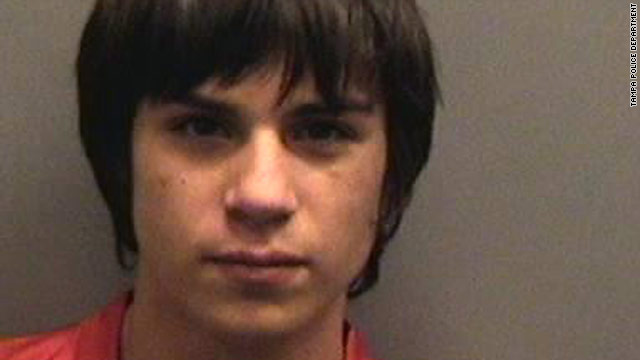 Jared Cano, 17, had plans that indicated that he intended to detonate explosive devices at his school, police say.
August 17th, 2011
01:13 PM ET

[Updated at 1:13 p.m.] Tampa police said they were able to thwart a mass murder plot that was planned for the first day of classes next Tuesday.

Tampa Police Chief Jane Castor said that police were able to stop a former student from carrying out what could have been a "a potentially catastrophic event" thanks to a tip from a citizen who came forward.

Hillsborough School District spokesman Steve Hegarty confirmed to CNN that a former student, who hasn't attended Freedom High School for a year and a half, had been arrested in connection with the alleged plot. Castor said there was no indication anyone else besides the one suspect was involved in the plot.

That student allegedly had planned to kill 32 people, including two principals, according to the St. Petersburg Times.

Tampa Police officers received a tip about the plot at 11:50 a.m. on Tuesday, police said.

Chief Jane Castor said during the search officers found a minute-by-minute manifesto showing what the suspect planned to do on the first day of school. Police also found materials that could have been used to make explosives including fuel sources, shrapnel, a timing device and fusing devices.

Along with the manifesto police said they also found "schematic drawings of rooms inside Freedom High School and disturbing statements about [Cano's] intent to kill."

Castor said 17-year-old Jared Cano's plan indicated that he intended to detonate explosive devices throughout the school. His plans specifically mentioned the names of two faculty members, she said.

The materials would have been extremely dangerous, Castor said, noting that if detonated they would have resulted in serious injuries "up to and including death." Police said they did not find any firearms in the suspect's apartment, but noted he had been arrested in the past for having firearms.

Hegarty said the school became aware of the incident when the Freedom High School principal sent out a "robocall" to parents and teachers.

Freedom High School Principal Chris Farkas as soon as they learned about the incident they began working with Tampa police.

He said that his immediate reaction was not an emotional one, but to find out if there was a credible threat and act on it.

"Some of the fear and emotional reaction came when we found the specifics of what they found in the apartment," he said.

Farkas added that Cano had been expelled from the school for an off campus incident, but did not provide further details. He said extra police will be present for the first day of school to make sure students and teachers feel safe. He said that if Cano had shown up at the school, many teachers and administrators would have known he was not allowed to be there.

"It would have been a red flag," he said.

Farkas said that teachers had been in school for safety training only 24 hours before Farkas had to stand in front of them again and explain that one of the scenarios they had discussed had actually come true.

Cano has been charged with threatening to throw, project, place or discharge a destructive device; possession of bomb making materials, cultivation of cannabis, possession of drug paraphernalia and possession of marijuana, police said.

Police said it will be up to the State Attorney's Office to determine whether the suspect will be charged as a juvenile or as an adult.