President Biden has been officially cleared to emerge from isolation after a second negative test following a rebouātwitter.com/i/web/status/1ā¦KF

President Biden has tested negative for Covid-19 but will remain in isolation pending a second test, his physicianātwitter.com/i/web/status/1ā¦VC

Actress Anne Heche is in critical condition after crashing her car into a house in Los Angeles and suffering severeātwitter.com/i/web/status/1ā¦Bq

A Texas jury has decided to penalize Alex Jones with $45.2 million in punitive damages in a lawsuit filed by the paātwitter.com/i/web/status/1ā¦u8 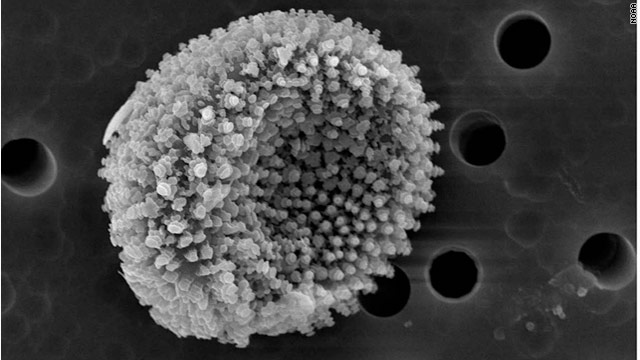 This image, taken with a scanning electron microscope, shows one of the spores that comprised the substance found in Kivalina.
August 18th, 2011
09:01 PM ET

A mysterious orange substance found on the shores of an Alaskan village this month is a mass of fungal spores, not microscopic eggs as an initial analysis indicated, the National Oceanic and Atmospheric Administration said Thursday.

The spores are consistent with those that come from a fungus that causes rust, a plant-only disease that causes a rust-like appearance on leaves and stems, NOAAās National Marine Fisheries Service said. 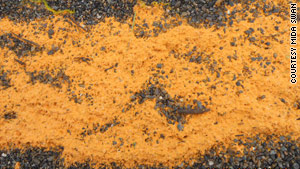 This orange substance mystified residents of Kivalina, Alaska, when it appeared on their shore August 3.

A NOAA lab in Juneau, Alaska, said last week that the substance appeared to be a mass of microscopic eggs, possibly those of a small crustacean. But samples were then taken to a NOAA lab with more advanced equipment - including a scanning electron microscope - in Charleston, South Carolina, NOAA spokeswoman Julie Speegle said.

That equipment and consultation with various specialists helped lead to the latest determination, said Steve Morton, a research oceanographer with the Charleston lab. Itās not known whether the spores belong to one of the 7,800 known rust fungi species, NOAA said.

āThe spores are unlike others we and our network of specialists have examined. However, many rust fungi of the Arctic tundra have yet to be identified,ā Morton said in a news release.

Residents of Kivalina, an Inupiat Eskimo village of about 430 people in northwest Alaska, found the substance in its lagoon - giving the lagoon an orange sheen - and clumps of the orange stuff on the beach on August 3. A resident who took pictures of the substance, Mida Swan, told CNN that it had an oily feel, like baby oil.

No one knew what it was. Village leaders were concerned that the substance might be a pollutant, and the state Department of Environmental Conservation sent samples to several labs.

Morton said by phone Thursday that rust fungi grow only on plants. Some grow without harming the plant, but others steal the plantās nutrients, Morton said. He said it is not clear whether the spores in this case are of a parasitic rust fungus.

Though the fungus doesnāt harm humans, spores in general - like pollen and mold spores - can contribute to respiratory diseases or allergic reactions, Morton said.

Leaders in various state agencies and programs, such as the Department of Environmental Conservation's Division of Water and the state's Drinking Water Program, are assessing whether the spores pose a risk to Kivalina and whether any action is necessary, said Emanuel Hignutt, analytical chemistry manager for the state's Environmental Health Laboratory.

The substance appeared to have dissipated days after it came to shore, said Janet Mitchell, Kivalina city administrator.

Kivalina is about 650 miles northwest of Anchorage, Alaska.

3:30 pm ET August 7, 2022 RETWEET
@HeatwaveKGNS - Richard, hope all is well. Curious to know the source of the Iraq obs. Can you share the website thātwitter.com/i/web/status/1ā¦4a
CNNweather

3:30 pm ET August 7, 2022 RETWEET
@HeatwaveKGNS - Richard, hope all is well. Curious to know the source of the Iraq obs. Can you share the website thātwitter.com/i/web/status/1ā¦4a
CNNweather

2:26 pm ET August 7, 2022 RETWEET
President Biden has been officially cleared to emerge from isolation after a second negative test following a rebouātwitter.com/i/web/status/1ā¦KF
cnnbrk

9:09 am ET August 7, 2022 RETWEET
President Biden has tested negative for Covid-19 but will remain in isolation pending a second test, his physicianātwitter.com/i/web/status/1ā¦VC
cnnbrk