Senior members of the British royal family attend an intimate service for the late husband of Queen Elizabeth II. FŌĆtwitter.com/i/web/status/1ŌĆ”UP

More than three million people globally have died of Covid-19 since the start of the pandemic, according to Johns HŌĆtwitter.com/i/web/status/1ŌĆ”kY 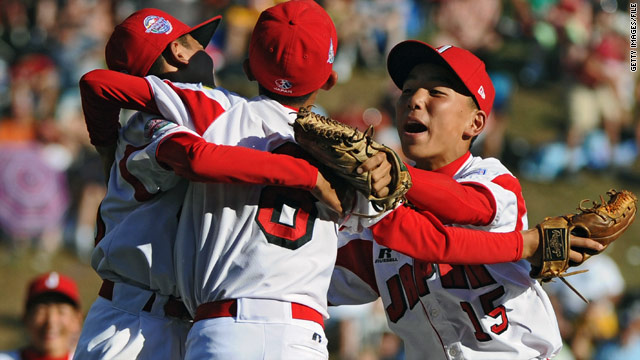 The 65th World Series will be played out on the diamond through August 28. It offers a chance to see some young talent who may end up playing on your favorite college or professional baseball team one day. And this year, for the first time, several new squads will be making their first start in Williamsport. Among them a team from Montana, a state that has never been represented in the series.

"Just to think, in 65 years," 12-year-old Andy Maehl told the Billings Gazette, "we're the only team from Montana to do that."

But perhaps most eyes may be trained on a team with a hometown advantage. For the first time in decades, a local team - one from Keystone, Pennsylvania - is competing in the World Series.

"Being 25 minutes away, the turnout should be amazing,ŌĆØ Keystone manager Bill Garbrick told the Centre Daily Times. ŌĆ£It will be exciting for us. These guys have been through some tough games, some real close ones, and they just showed the same kind of heart that they showed the last two days. And thatŌĆÖs what got us here.ŌĆØ

Syria meeting at U.N.: The U.N. Security Council on Thursday is expected to receive a briefing on Syria, where violence is reported to have flared this week amid a monthslong crackdown on anti-government protesters.

The briefing would come a day after Syrian President Bashar al-Assad told U.N. Secretary General Ban Ki-moon in a phone conversation that military and police operations in Syria had stopped, according to a U.N. statement. Before that conversation was reported,┬Āan opposition activist group said that 19 people were killed Wednesday in crackdown-related violence in three Syrian communities. Also Thursday, protesters accused Syrian forces of rounding up opposition members in the port city of Latakia.

Al-Assad has been under enormous international pressure to end the crackdown against protesters, who have called for free elections and an end to his regime. Demonstrators have accused al-Assad of trying to crush the uprising with military force.

Thursday's briefing is not expected to result in issuance of a statement or adoption of a resolution; its purpose is to get the 15-member council closer to a decision on how to proceed.┬ĀThree U.N. officials are expected to brief the council Thursday.

9/11 firefighter ceremony: U.S. Homeland Security Secretary Janet Napolitano is scheduled to speak Thursday at a New York ceremony honoring the more than 300 firefighters who died in the city as a result of the September 11, 2001, attacks.

The International Association of Fire Fighters is holding the ceremony - nearly 10 years after the attacks - at 11 a.m. ET at the conclusion of its five-day conference at the New York Hilton.

The ceremony comes as advocates for police officers, firefighters and civilian volunteers who worked at ground zero are decrying the cityŌĆÖs decision not to invite first responders to this yearŌĆÖs September 11 memorial ceremony.

NapolitanoŌĆÖs speech will come a day after she┬Ā unveiled new television ads for the "If you see something, say something" campaign, which urges the public to help authorities thwart terrorist acts by reporting suspicious behavior.

@unifylabor I disagree with you. But you are always free to stop reading my tweets and my work.
sarasidnerCNN

11:13 am ET April 17, 2021 RETWEET
The Queen has been led by the Dean of Windsor out of the chapel following the conclusion of the approximately 50-miŌĆtwitter.com/i/web/status/1ŌĆ”3s
cnni

11:00 am ET April 17, 2021 RETWEET
Super Typhoon #Surigae now has sustained winds of 285 kph (180 mph), which is equivalent to a category 5 hurricane.ŌĆtwitter.com/i/web/status/1ŌĆ”Wy
CNNweather

10:54 am ET April 17, 2021 RETWEET
The royal family is strictly adhering to UK Covid-19 protocols. As such, the Queen is seated alone to follow currenŌĆtwitter.com/i/web/status/1ŌĆ”Xw
cnni

10:48 am ET April 17, 2021 RETWEET
@Angielene_BLM @JordanChariton @Trandyw5 @CNN @donlemon You ain't watching my reports and I am the reporter on theŌĆtwitter.com/i/web/status/1ŌĆ”9S
sarasidnerCNN