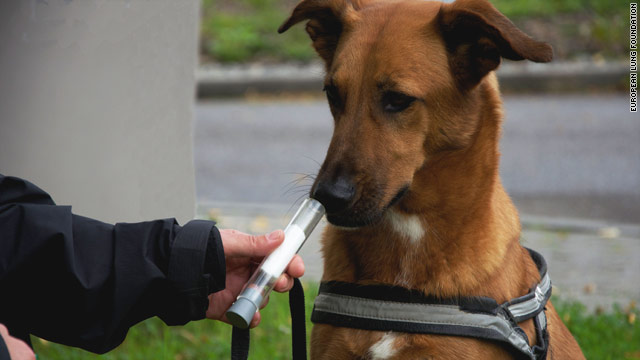 Overheard on CNN.com: Listen to your dog, the doctor!

"How much are they charging for the 'Lab' tests?"–J

"All this time we've been doing CAT scans – we should have been doing DOG scans!"–Patrick
"Actually, the newer technology is called 'PET' scans! LOL"–Liz

If your dog shows a sudden, unusual interest in your breath, a mole, or a particular area of your body, you might want to let your doctor know, said many CNN.com readers. Dogs were able to smell lung cancer in breath samples, a recent study shows, and readers shared about their own pets' disease-sniffing abilities.

ldean50 said, "My two Labradors, Maggie and Morgan, and I had a nightly ritual: They would lie down on their beds in the living room, and I'd cover them up. I was having symptoms I thought were connected to menopause. One night Maggie and Morgan came to my room. Morgan lay down next to my bed, near my head, and Maggie sat like a guard in the doorway. I woke up in the middle of the night, and they were still there but had changed places. They did this for three weeks regardless of my cajoling. I recalled an "Animal Planet" show about dogs and cancer and went to my gynecologist. I had uterine/ovarian cancer and a complete hysterectomy. The first night home Maggie and Morgan went back to their beds in the living room. The doctor told me I would have been at Stage 4 within the year. Pay attention to your dogs' unusual, unexplainable changes in behavior!"

Mary said, "I had a dog that was really into smelling my breath for three years. Then I was diagnosed with lung cancer, had a resection, and came home from the hospital; she approached me to smell my breath. The lung cancer was gone and so was her interest in my breath. As I would go for followups, I would check with her first to see if she was interested. Never again. After 11 years, the cancer has not come back."

KandyKane said, "Our dog, who follows me most of the time, suddenly would not leave my husband alone. Even when he went to the bathroom, she was right outside the door. Shortly after, he was diagnosed with cancer. After he started his radiation treatment, she would leave him alone more and more each day until she was back into her 'routine' of following me (I don't have cancer, thank goodness). Last summer, the dog started obsessing over my husband again, and this time it unnerved us. His annual scans showed the cancer had returned in a different location. Luckily, surgery removed all of it, but I'm definitely keeping my eye on the dog. If she starts getting infatuated with my husband again, his butt is going straight to the doctor!!"

SeattleRain said, "In 1999, I went to a dermatologist during my lunch hour because of a tiny mole on my upper right arm. She didn't think much of it and was leaving the room when I told her my two dogs were 'fixated' with it and would stick their noses on it and hold perfectly still for a long time as if smelling something weird. She called her staff in and immediately took the mole off. She wouldn't even let me reschedule removal for later."

maxsmom said, "My husband has Type-2 diabetes. He ended up having a toe amputated because of a severe bone infection. For weeks before we discovered this, our friend's beagle would obsessively sniff that toe. Now when our dog sniffs anything, we have it checked out. Recently another sniff-fest on his other foot. Sure enough, diabetic ulcer forming! Pay attention to your dog."

NoTags said, "Give the dogs a white coat and let them open a practice. Just a box of dog biscuits and maybe a bone would make the dogs happy." Marion replied, "Funny post. I am sure the dog would actually 'listen' to me too. LOL"

From omnivore to vegan: The dietary education of Bill Clinton

Our hamburger-chomping former president a vegan? According to Bill Clinton, a pair of heart procedures and some advice from a trusted doctor made him change his ways. The former president says he consumes no meat, no dairy, no eggs, almost no oil, and has lost more than 20 pounds. Even with the former president's example, CNN.com reader response–as with many stories on diet–was mixed.

denne11 said, "While I congratulate him on the switch, anything would have been better than what he was eating."

faycebooque said, "I never knew the former Prez was a fellow vegan. Cheers Mr. Clinton! It's been 6 years for me and there's no way I'm going back." nickvicious said, "Way to go, Bill! When I went vegan I got a LOT more energy. I need less sleep as well and a lot of my ailments (seasonal allergies, headaches, anxiety) lessened or disappeared altogether."

But ReddirtTXn said, "I got bad news for vegans: You're still gonna die." Anavar said, "I never have really seen a healthy-looking vegan."

BillNaughton said, "Not necessarily true. There's a famous Arnold Schwarzenegger quote; "Bill Pearl didn't convince me to become a vegetarian, but he did convince me that a vegetarian could become a champion bodybuilder."

itsallgood70 said, "Just because we eat some meat doesn't mean we're going to die a horrible death. Some of these posts on here just add proof to the stereotype that vegans are self-righteous a-holes."

MamaTurtle said, "If we aren't supposed to eat meat, then why do I end up hospitalized with malnutrition when attempting a vegetarian or vegan diet, even after following physician's advice? A little raw fish and some rare grass-fed beef, one each per week, plus a few servings of raw milk, seem to keep me in much better health."

ajh011 said, "I am a doctor and I eat 98%+ plant foods. A comment posted earlier here about how we need cholesterol is false: our liver makes all we need on its own. That same commenter said that having canines means we are supposed to eat meat, which is also nonsense: gorillas have larger canines than we do, as do many other herbivores. It is possible to eat well on a plant-based diet, and there is substantial evidence to show that this type of diet can and does reverse multiple types of diseases such as Diabetes, cardiovascular disease (heart disease) and obesity, if followed correctly. And it can be quite satisfying."

AndreaMilnes said, "On the one hand, I believe in hedonistic feeding. If you have a chance to eat foi gras, by all means have at it, because you only live once. On the other hand - vain girl that I am - one of the musicians I particularly like is vegan, and he hasn't aged a day since 1985. So I guess the lesson here is eat the good stuff when you get the chance, but the rest of the time, stick to the healthy food."

SJS52987 said, "To me going vegan is like going to AA meetings. You shouldn't do it unless you can't handle moderation or if it has been recommended by your doctor."