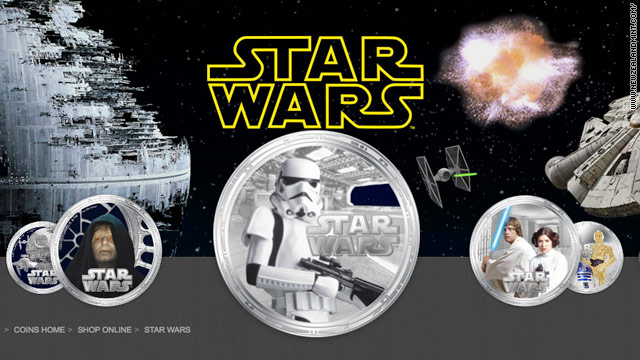 The New Zealand Mint website shows off the coins that are available for pre-order online.
August 18th, 2011
12:51 PM ET

With the current state of the U.S. dollar and global economy in flux, perhaps it's time to turn to The Force for answers.

The New Zealand Mint may be hoping The Force is good for their business as it prepares to churn out newly-minted "Star Wars" coins. The coins, though they will primarily be collectible in nature, are actually going to be considered legal tender on the South Pacific Niue Island.

"New Zealand Mint is proud to launch one of cinemaâ€™s most enduring and beloved franchises, Star Wars, as a legal tender coin set," the Mint's website said. "These coin series will be hugely popular for both Star Wars devotees and coin-collectors alike. This first series is a limited mintage and are quite simply out of this Universe. Donâ€™t deny the Force within you, and get your set today."

For the 2,000 residents of "The Rock" as the island is known, the coins will be full legal tender. Niue is a self-governing island, but is not entirely sovereign from New Zealand. It relies heavily on aid from New Zealand and other countries overseen by Queen Elizabeth II, who will be featured on the flip side of each coin.

According to NPR, the island will receive a royalty payment from the New Zealand mint for using the coins.

The coins, made from 1 ounce of pure silver, will be sold for much more than their $2 face value. But at least fans will have a large selection to choose from. The coins will feature more than 40 characters, but will cost about $20 when you buy them. Or, of course, if you're a super fan you can opt for the Millennium Falcon Coin Set or the Darth Vader Coin set - but the four coins and fancy case will set you back quite a bit with a pricetag of a little more than $380 (without shipping, of course.)

The US FDA announced that it has made several changes to breast implant regulations, including new labeling that inâ€twitter.com/i/web/status/1â€¦Jr
cnni

10:04 pm ET October 27, 2021 RETWEET
In a settlement between Philadelphia and the family of Walter Wallace, the city says it will provide money for stunâ€twitter.com/i/web/status/1â€¦UG
cnni

9:28 pm ET October 27, 2021 RETWEET
As part of a yearly tradition, the mayors of the two World Series participants have a wager. The losing mayor, beâ€twitter.com/i/web/status/1â€¦dL
cnni

9:22 pm ET October 27, 2021 RETWEET
The top US general said China's test of a hypersonic weapon over the summer was "very concerning" and that "it hasâ€twitter.com/i/web/status/1â€¦CR
cnni