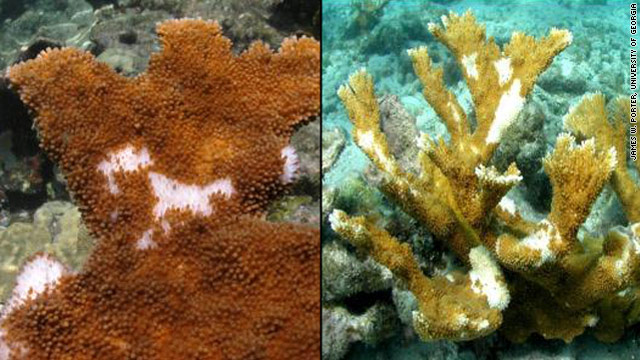 Photos from research show the white blotches, caused by bacteria from waste, that appear on coral in the Florida Keys.
August 18th, 2011
11:01 AM ET

Human feces making their way through wastewater facilities and into the ocean are passing along a white pox disease-causing bacterium that's killing Elkhorn coral near Key West, Florida, a new study says.

"These bacteria do not come from the ocean; they come from us," said James W. Porter, a University of Georgia ecology professor, adding that mankind has a responsibility to respond and save a massive area around the Florida Keys.

Porter and his colleagues say the study for the first time gives evidence of a new way of spreading diseases. Usually, bacteria are transmitted from wildlife to humans, for example, in the case of Avian flu. But here, the researchers' findings, which were published in the peer-reviewed journal PLoS ONE, show that diseases can in some cases be passed on from humans and affect wildlife to the point where it causes a population decline.

When they began studying corals, researchers learned the bacterium Serratia marcescens was the cause of white pox. The bacterium is mostly associated with infections usually acquired in hospitals by newborns or immune-compromised adults. It can be responsible for a variety of infections, from meningitis to pneumonia.

"Bacteria from humans kill corals - that's the bad news," Porter said. "But the good news is that we can solve this problem with advanced wastewater treatment facilities."

Upgrades to these facilities under way in Key West are important, he said.

"This problem is not like hurricanes, which we can't control. We can do something about this one," Porter said.

The disease caused by the waste leads to white blotches on coral. The blotches appear when bacteria kills the top layer of coral tissue, exposing the white limestone skeleton of the coral.

"We are killing the goose that lays the golden egg, and we've got the smoking gun to prove it," Porter said.