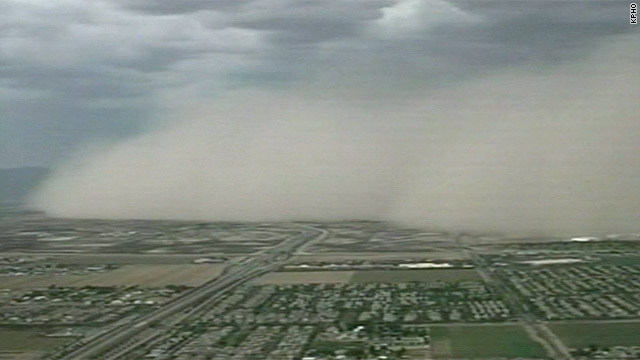 A massive dust storm rolled through Phoenix on Thursday, the third such storm to blanket its metropolitan area this summer.

The cloud of dust was 50 to 60 miles wide and 3,000 to 4,000 feet high, National Weather Service meteorologist Dan Leins in Phoenix said.

The dust reduced visibility to under a quarter-mile, was likely to blame for several traffic accidents and closed Sky Harbor International Airport for 40 minutes, according to a report in The Arizona Republic. More than 5,000 people lost electrical power at some point, and a few dozen structures and vehicles were damaged, the paper said.

Leins said the massive dust cloud, also known by the Arabic term haboob, was driven by 40-mph to 50-mph winds spawned by severe thunderstorms that form to the southeast of the Valley of the Sun, where Phoenix sits.

The storms push out winds that travel unimpeded through the desert, picking up dust, dirt and debris and carrying it over the valley, Leins said. Damage in these situations is caused by thunderstorms rather than the dust cloud, he said.

Thursday's dust cloud was the third to rip through the Valley of the Sun this year. Haboobs also enveloped Phoenix on July 5 and 18.

The office of a Russian magazine for students was raided and several of its editors were temporarily detained by auâ€twitter.com/i/web/status/1â€¦0r
cnni

7:00 am ET April 15, 2021 RETWEET
Nepal's population of one-horned rhinos has increased to its highest number in more than 20 years, partly owing toâ€twitter.com/i/web/status/1â€¦vD
cnni